Talking to Palomar Pomerado Health Chief Executive Michael Covert is like talking to a bulldozer. With more anecdotes and information to share in an hour than seems humanly possible, he simply dumps them all out at once in a breathless heap.

That was the experience of a reporter trying to find out exactly what's going on over at the hospital center, which is expanding dramatically in size and capability thanks to a $496 million bond issue in 2004 and another $500 million dollar in fundraising and outlays.

It's not that Covert is an unpleasant interview. On the contrary, he was polite and gracious, and generously gave an hour of his time when the gatekeepers had allotted just 30 minutes. Perhaps that's because he knows a half hour -- and, indeed, a full hour -- is not enough time to explain the so-called "hospital of the future." 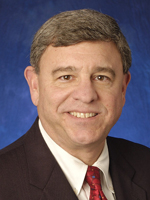 "It's technology. It's also in the way we care for people," said Covert, when asked to explain what it means to be the hospital of the future.

The $1 billion project includes the new 600-bed Palomar Medical Center West in Escondido, North County's first new hospital in 30 years; the doubling in size of the 107-bed Pomerado Hospital in Poway; redevelopment of Palomar Medical Center in Escondido; and the development of satellite outpatient centers in places like Ramona. Covert expects the hospital district could eventually have more than 6,000 employees compared to approximately 3,800 now.

Covert said the plans were developed to meet the demands of a public health care district spread over 800 square miles in one of the county's fastest growing and heavily trafficked residential and employment centers.

"At 2 in the afternoon if you have a heart attack in Ramona, you are going to have an interesting challenge," Covert said.

With that in mind, plans for the hospital of the future are designed to meet the community's needs for emergency, urgent and routine medical care and therapeutics while at the same time providing a radically different experience for patients and health care providers. The plans are based on an emerging concept in medical care: evidence-based design. According to the Concord, Calif.-based Center for Health Design, evidence-based design reduces medical errors and hospital-borne infections through environments that are therapeutic, supportive of families and efficient places to work.

The core of the new hospital's efficiency is that patients brought into the emergency room, for example, will stay in one room during their entire stay rather than being moved throughout the hospital as their condition changes from emergency to surgery to intensive care and so on.

"That's where a lot of mistakes are made -- in the hand off," said Covert, noting that a patient in conventional hospitals might change rooms as many as three, four and even seven times. The concept is known as acuity adaptability, and also calls for radiology and catheterization rooms that can serve as operating rooms, and vice versa according to need.

Nurses will also be closer to patients in the hospital of the future, with stations in between rooms rather than at a central location. Each patient room will be the same, with every device in the same location to reduce medical errors related to orientation. Rooms will also be larger. And a roaming robot will act as a liaison between off-duty doctors and their patients and families.

Covert's team is partnering with some of the world's biggest -- Cisco (Nasdaq: CSCO) -- and hippest -- Second Life -- technology companies to develop and experiment with new technologies for the hospital. Palomar Pomerado Health is also participating in the Center for Health Design's Pebble Project, in which approximately 40 hospitals across the country experiment with elements of evidence-based design.

For example, Palomar Pomerado is testing 10 LifeBed wireless mattress covers that monitor vital signs. Developed by Hawaiian company Hoana, the mattress covers have an embedded sensor array that will signal the nurses' station when a patient is in distress or attempting to get out of bed. And it's all done without the hassle of actually attaching anything to the patient.

Speaking at the annual conference of the Healthcare Information and Management Systems Society in Orlando, Fla., on Feb. 25, Covert unveiled a radical experiment in hospital simulation in partnership with Cisco and Second Life. In the popular online game, more than 12 million "residents" live in an alternate, three-dimensional world, working, buying real estate, and, yes, going to the hospital. Covert said the Second Life experiment offers an opportunity to test out some of the new hospital's core concepts.

For example, when families and patients enter the hospital, particularly during off hours, they will check in through an electronic greeting center that will spit out a bar code and direct them to their suite. The system will work like GPS devices in cars, directing patients and families around the hospital with holographic arrows and recalculating when they go off course. Healing gardens positioned around the hospital will be "major conservatories with magnificent views" so that patients and their families can relax without having to leave their floor.

Covert's emphasis on technology solutions and efficiency is informed at least in part by his prior experience as CEO of the Washington Hospital Center in Washington, D.C., during the Sept. 11, 2001 terrorist attacks.

"What I learned more than anything else was the need for communications and excellent leadership and organization in a major disaster," Covert said.