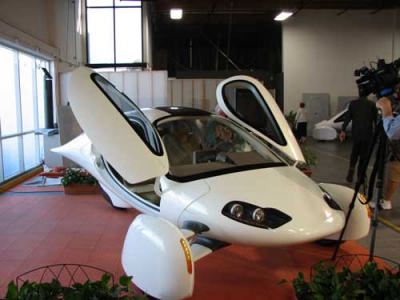 The designers at Aptera get a lot of strange e-mails about the cars they make.

People ask if their cars can drive underwater. What would happen if they drove into a volcano? Most of these questions are nonsense of course, but after seeing the Aptera in action, it’s no wonder that it gets interesting reactions.

Your mom’s Chevy, it is not.

Aptera has created two models -- one electric and the other a gasoline/electric hybrid -- of a three-wheel car they hope to put on the market toward the end of the year.

With an aerodynamic, light-weight design, it looks more like something out of the "Jetsons" or "Star Wars" than anything Toyota (NYSE: TM) or Ford (NYSE: F) is producing, but the co-founders of the company say it's ready to drive on any freeway in Southern California.

“During a typical driving cycle, if you drive this 40 miles a day, you take it home, plug it in for two hours, the next time you’ll have a fully-charged vehicle you can drive 120 miles the next day in comfort and safety,” said Chris Anthony, co-founder and chief operating officer of Carlsbad-based Aptera.

Anthony was describing the electric model, which is scheduled to be ready first, available for customers at the end of the year. The hybrid is expected to take a little longer.

The electric model charges into any three-pronged wall outlet. The hybrid, once it's ready, is expected to get about 300 miles per gallon of gas, and have a five-gallon tank.

The cars have MP3 capable stereos and GPS systems, most of the amenities you’d expect on any modern car. They have a solar-powered temperature control system that generally keeps the car at 75 degrees no matter what it's like outside, saving energy usually used by heaters and air conditioners.

Parts of it are made out of recycled materials and the panels are dent resistant.

The Aptera goes as fast as 85 miles per hour, so you can drive it on the freeway, and Anthony said it has stood up to the same computer-simulated safety tests that major car companies like Hyundai put their cars through.

Though it only sits on three wheels, the wheels are designed to be wide set, like a Formula 1 racecar, to avoid flipping. The trunk holds 35 grocery bags, and if you put down the passenger seat, you can fit two 7-foot surfboards, according to Anthony.

Priced at a little less than $30,000, the Aptera costs about as much as the average new car on the market today.

Still, the car has drawbacks. It only seats two people -- there is a place in the back for a car seat for a small child.

The batteries, like those of most hybrids, are very expensive to replace, costing upwards of $6,000. But Anthony said the batteries should last for 10 to 14 years.

There aren't any mirrors, but instead cameras show the driver what's going on behind and around the vehicle, which would be a major adjustment for most drivers.

And then there is the look. During a demonstration outside Aptera’s Carlsbad design space, small airplanes kept flying overhead from nearby McClellan-Palomar Airport.

It was hard not to notice that the Aptera resembled the Cessnas above more than the Camrys on the ground.

But Chief Executive Officer and Co-Founder Steve Fambro said he thinks people are ready to start exploring other options, especially with gasoline hovering between $3 and $4 a gallon these days.

“It's hard to make a valid case for an electric car when gas was as inexpensive as it was (a few decades ago), but I think people are starting to make the connection not only with the environment but with politics and everything else, that it's all tied together and we need more options,” Fambro said.

An electrical engineer by trade and a car enthusiast since before he could drive, Fambro started building a prototype for an electric car in his garage a few years ago.

That prototype is now being used as a planter in Aptera’s warehouse-like office and design studio. Fambro met Anthony, who was also working on similar ideas, and they decided to combine them.

They were particularly interested in why cars used so much gas and found that it mostly had to do with air resistance.

That is the key difference between other electric cars and the Aptera, Fambro said: The Aptera is not a Taurus that has had the gas tank removed and replaced with an electrical charger. It was designed from the start to be an electric car. This makes it perform better.

“It actually can be a much more fun vehicle to drive than a gasoline engine vehicle,” Fambro said. “We weren’t able to offer that kind of performance beforehand because we were making the cars out of steel, we were making them un-aerodynamic.”

Aptera plans to produce all the cars in Carlsbad, and the first dealerships will all be in Southern California. They’ve already pre-sold 1,100 models, with more people wanting the hybrid than the electric.

According to Anthony, the low-overhead company will begin making a profit after selling just 300 vehicles.

“The plan down the road is to offer different vehicles,” Anthony said when asked if Aptera might someday offer a family car or something more sporty. “The fundamental design constraint for this (current model) is, 'How do you surround two people at highway speed safely in the most efficient manner possible?' This vehicle uses less energy per unit mile than anything ever put on the road.”