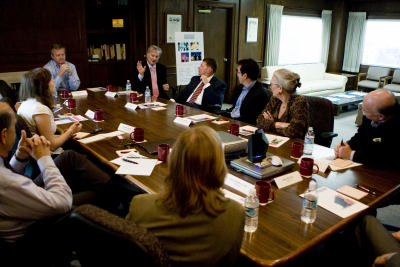 When Arlene Harris, who's been in the wireless industry since before most people could imagine a cell phone, was trying to secure funding for a company that designs phones for older people, she was told there was no market for her product.

"We have older consumers," she said. "The venture market wants to invest in youth, and we have perceptions that you're gaining customers that are going to die and you're not going to have any products to fill in, so your business isn't going to have sustainability."

Harris' company, GreatCall Inc., managed to get off the ground with funding from Harris and her husband, and a product Samsung built for the Del Mar company free of charge. The company now has tens of thousands of customers across the United States. But Harris said that disconnect between what venture capitalists are after and what the wireless industry can create can often stifle creative young companies.

Others in the industry agreed. At a recent Daily Transcript roundtable sponsored by Mintz, Levin, Cohn, Ferris, Glovsky and Popeo PC and featuring local leaders of the life science and wireless industries, there was much discussion on how those two sectors are merging. But there was also talk about how sometimes a lack of communication -- be it between companies and investors, engineers and consumers, or even different generations -- can sometimes have more sway over what companies and products survive than anything else.

Harris' idea was to create cell phones that act more like regular phones. There are no cameras, games or hip ring tones. The phones simply make calls. The buttons are bigger and the speakers are louder. While these phones are often perceived as being for elderly people, Harris also had the Baby Boom generation in mind. That generation is getting older, but they still have a lot of wealth, are still accustomed to being catered to, and there are still a lot of them.

"We're going to have to continue to innovate to stay relevant to the customers that are moving into our age demographic because their attitudes and needs are going to change," she said. "We think we have a forever business."

Despite her company's success, however, Harris said she still has trouble convincing some venture capitalists.

Darrel Drinan, founder and president of PhiloMetron, a company that makes wireless human sensing products, said he sees this disconnect as being pervasive in the wireless and life science businesses. In large biotech companies, he said, device departments often won't speak to the pharmaceutical departments. At venture capital firms, the life science specialists don't talk to the technology specialists. In the past, this hasn't been that big of a problem, but he thinks the problem will increase as industries become more integrated.

It's also a problem as demographics change. Perhaps contrary to common perception, when it comes to health care technology, women actually purchase more electronics than men, Drinan said. The trouble is, the engineers designing the products are men, and they often have different wants and needs from their electronics.

Drinan said, however, that he thinks San Diego has the kind of business environment that could help small technology companies with outside-of-the-box ideas survive. The region has a history of different companies and sectors working together, rather than acting as fierce competitors.

Don Jones, who heads up Qualcomm's (Nasdaq: QCOM) new wireless life science department, said the company has made a habit of creating teams out of not just Qualcomm employees but also partners from outside the company.

"Almost all of our work is partnering with companies," Jones said. "We bring bio-engineers and electrical engineers and physiology guys and M.D.s together in solutions and force them to work together."

But most of the local industry leaders agreed that, like with so many things, education is the answer. Universities must show students that just creating electronics isn't going to change the world; you must market it, they said. And the future financial backers of the world must see that just because something hasn't been done doesn't mean it won't work.

Harris sits on the boards of several universities and said she is seeing more convergence at the university level as well, but it's still in its infancy.

"Every head of every business school in the country is looking at: How can I make my graduates broader? How can I make them respect the science guy? If they've got an engineering school, How can I expose them to what the marketing department contributes?" Harris said. "Right now, it's in the labs because it's just so difficult to figure out how you change educational institutions to try to mirror what you're trying to do in industry."