The good news for the San Diego region: This M&A activity and venture capital trend is expected to continue through 2008, according to a recent report published by auditing firm KPMG. The report, which surveyed 350 venture capitalists, entrepreneurs, corporate buyers, investment bankers and research analysts on trends in venture capital over the upcoming two years, found that 85 percent of respondents indicated their expectation of venture capital activity to continue growing or remain at current levels. Fifteen percent of respondents forecast the life sciences sector to receive the most capital over the two-year period, placing it second behind the greentech/cleantech sector. 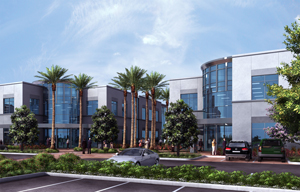 Nexus Properties is developing a $54 million, two-building life sciences campus at I-805 and La Jolla Village Drive, with occupancy of the first facility anticipated by early 2009.

Absorption levels for biotechnology real estate in San Diego have felt the positive affect of this growing relationship between big pharma, venture capital and biotechnology.

Year-end 2007 direct vacancy rates for wet lab space migrated downward to 5.05 percent in Sorrento Valley; Sorrento Mesa vacancy decreased to 4.30 percent; and UTC led the county with a 4.18 percent vacancy rate. This downward trend in vacancy has continued throughout the first two months of 2008, with sustained leasing activity among 5,000- to 20,000-square-foot tenants forecasted to continue throughout the year.

With the exception of a few companies, San Diego's life sciences companies are clustered within the submarkets of Torrey Pines, UTC, Sorrento Valley and Sorrento Mesa. The lab market in San Diego stands at approximately 8 million square feet of specialized lab space and another 4.7 million of owner-occupied lab space.

"Tenant demand for this product type in the UTC market has been historically strong and should continue, given the surge in biotechnology venture funding," said Tom Mercer of Colliers International. Mercer, along with Chad Urie and Michael O. Reidy of Colliers International, are representing Nexus Properties Inc., a leader in the development of biotech research facilities with more than 1 million square feet in San Diego County.

Nexus is currently developing a $54 million life sciences campus at La Jolla Village Drive and Interstate-805 in UTC. The two-building, 161,871-square-foot project is under way with occupancy of the first building, consisting of 58,904 square feet, anticipated by first-quarter 2009.

According to Colliers, demand by small-tier biotech companies -- users of 3,000 to 20,000 square feet -- should continue well into 2009. As these startups continue to grow, they will demand significantly more space.