By BRIE IATAROLA, Special to the Daily Transcript
Thursday, March 27, 2008

In a nation where a growing number of people seem to cherish the welfare of their household pets just as much as -- if not more than -- their fellow human beings, Vet-Stem CEO Robert "Bob" Harman sees endless potential for his company.

Nearly six years ago, the 58-year-old veterinarian-by-training, statistician and biotechnology entrepreneur teamed up with business partner Mike Dale to found Vet-Stem, a Poway-based firm that specializes in regenerative stem-cell therapy for horses, dogs and cats that suffer from arthritis and tendon, ligament and joint injuries. At the time, Harman said, the biggest question was whether his enterprise had entered the veterinary products market prematurely.

"Would people actually pay for regenerative stem-cell therapy for their pets?" he asked during a recent interview. 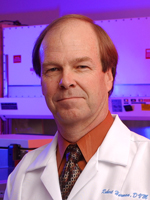 Pushing aside his uncertainty, the former consultant abandoned the idea of early retirement and turned to the equine world to find out, first testing Vet-Stem Regenerative Cell (VSRC) therapy on horses as early as January 2004 after securing a worldwide exclusive license to adipose-derived stem-cell technology for veterinary uses in October 2003.

"We were totally taken by the huge range of possibilities of what regenerative medicine can do," Harman said. "There were already lots of animal studies before we came along, so we didn't have to do traditional animal studies. We just extracted the cells from fat in a horse and dog ... and then adapted the techniques to see if it worked."

In the three-day procedure, a veterinarian surgically removes about two tablespoons' worth of fat from the patient and ships it to the Vet-Stem laboratory, where the sample is processed. The animal's own regenerative cells are isolated, stored in syringes and returned to the vet. The cells are then injected into the wounded area.

Initial results showed promise. And the latest technology's estimated price tag of $2,500 (it varies depending on the animal's particular condition or disease) was cheaper than a joint surgery or replacement, which costs between $3,500 and $10,000.

Along with a plethora of case studies that demonstrated improvements from a single injection last anywhere from "six months to many years," the American Journal of Veterinary Research published data from Cornell University's double-blinded, placebo-controlled study that also confirmed animal subjects benefited both statistically and biologically from VSRC therapy, Harman said. These findings contradicted standard protocol that anti-inflammatory drugs or joint replacements were the most effective ways to treat animals hampered by soft-tissue tears, fractures and arthritis.

"I try to give an honest expectation when people ask," Harman said. "The worst side effect is that (the therapy) doesn't work. However, two-thirds of the animals we treat get really better, and it's quite observable -- less pain and less effect on quality of life."

Case in point: In 2005, professional polo player Adam Snow's prized mare, Rio, tore her right-front superficial digital flexor tendon. Rather than relying on traditional efforts to treat the injury, Snow utilized VSRC therapy and then placed his pony in an eight-month rehabilitation program. She bounced back strongly enough to clinch the 2006 U.S. Open and 2007 CV Whitney.

Rio is just one of 2,000 horses that have received treatment since 2004, along with nearly 300 dogs. Although research focuses heavily on these two animals, cats also have undergone stem-cell treatments.

"Cats can hide their pain," Harman said. "They just show it differently. The hidden disease in cats is osteoarthritis, and a lot of owners don't recognize it. (The therapy) works the same in cats."

From a business standpoint, however, Harman believes dogs will provide real growth for Vet-Stem, as well as the company's banking program, where more than 2,000 samples from horses and dogs are frozen in suspended animation and stored in liquid nitrogen so that pet owners can refer to them for future use in their animals. The cost for storage after the first year runs $150 per year.

Judging the interest veterinarians and pet owners have expressed in VSRC therapy, Harman's dream to infiltrate every major animal market within five years is entirely possible.

"Business is growing; customers are accepting the technology," he said. "(Pet) owners are excited. The reaction has pushed vets rapidly, and hundreds have picked up on the technology and the business. ... It's a real business."

Just how real? Gross revenues are expected to hit $3.5 million this year, and they have more than doubled each year since the company, which employs 30 workers (six of whom are veterinarians and two who hold doctorates), first began operating. In September 2007, Vet-Stem also opened its first lab outside of San Diego in Dubai, United Arab Emirates.

"We're pretty much in a class of our own," Harman said. "Our major competition is what people used to do. Now we're offering a new mode, and our biggest competitor is getting people trained to understand."

Part of that training includes a 3.5-hour, American Veterinary Medical Association-approved certification course designed for veterinarians who want to understand how to use regenerative medicine. Once available only in San Diego, Vet-Stem began offering the program online in January, and more than 700 veterinarians have signed up.

"They get a whole module on the science, clinical use, practicality on how to do it and how to integrate it into their clinic," Harman said. "It's a science course, not a marketing piece. We teach what not to use it for, too."

Although animals are the subject of interest for Vet-Stem, Harman has collaborated with companies that focus on the human application, and he believes regenerative medicine will fare better than controversial embryonic stem-cell testing for the two-legged race.

Doctors are already treating patients in Central America, Asia and Europe with similar technology, he said, and "the big push is with heart disease and neurological disease."

"There's such an advantage," he added. "This is their own cells."