When Raymond Wagenknecht opened his own law practice several years ago, he decided against naming it after himself.

While proud of his family's heritage, he found it to be, well, not so catchy, and more than a little difficult to say (for the record, it's pronounced WAG-ah-nect).

The name he finally settled on -- Biotech Beach Law Group PC -- pays tribute to the moniker San Diego is known as throughout the scientific community, although it, too, can be a bit confusing.

"A lot of nonscientists don't (get the reference), so they think I practice beach law," Wagenknecht said with a laugh. "I've gotten pinged for environmental law, which I don't do. 'Is this the surf rider foundation' ... that sort of thing." 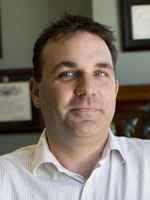 He also wanted the title of his practice to convey a less stuffy, nonthreatening environment for potential clients to enter to discuss their intellectual property.

"I try to give (the practice) a feeling of welcome-ness," Wagenknecht said. "When people walk into law offices, they can have their guard up. I just want to represent the lighter side in a sense."

His surname has been beneficial in one aspect, though.

"It's helped with European business," he said. "A majority of my European clients are German."

Wagenknecht practices patent and trademark law for life sciences companies -- mostly startups and small biotech firms -- and nonprofit research groups. The majority of his work involves patent prosecution. He also conducts due diligence, evaluating the technology of competitors to make sure his clients don't have any infringement issues.

He isn't involved in much litigation work, typically only assisting litigation groups of other firms in helping them understand the underlying technology.

In addition to performing the basic patent prosecution tasks, Wagenknecht also helps guide his clients to where they might get coverage and advises them on potential products.

"I think the science in San Diego is really, really strong," he said. "Sometimes it helps to get another take on what it is they're doing and maybe where you think they can take it."

As the sole full-time member of Biotech Beach Law, Wagenknecht tries to keep expenses down for his clients, many of whom are fledgling companies with limited budgets. His efforts become even more important as the costs associated with intellectual property continue to rise and the U.S. Patent & Trademark Office tighten restrictions on patent applications.

He owns a fairly modest, two-room office toward the center of downtown, eschewing Del Mar/Carmel Valley -- the trendy and pricey home to many of the region's intellectual property groups.

And Wagenknecht only hires consultants on a case-by-case basis, like when he needs a specialist in chemistry or biology.

He considers himself a product of the biotech community. The Cincinnati native came to San Diego in 1988 specifically to get a degree in microbiology from the University of California, San Diego, and has been here ever since.

He worked in the school's research labs and, upon graduation, nabbed a job at several startups, including NovaDx, a spinoff of Hybertech that is no longer operating.

While at NovaDx, there was a question of whether a technology the company was developing was covered by another group's patent portfolio. Wagenknecht worked with the science group and the company's attorneys to figure out the scope of the patent in question.

The experience began his love affair with the legal side of patents, and soon thereafter he enrolled at the University of San Diego School of Law.

After earning his law degree, he worked as a scientific advisory for a small intellectual property group and assisted a few patent attorneys. The work morphed into his own practice.

"I feel like I'm a part of the biotech community," Wagenknecht said. "There's a sense of home with San Diego biotech. I want to promote them as much as possible. We have a lot of really, really smart people here. I think there are some good companies, so obviously you want to help them."

San Diego's large biotech presence has drawn the attention of national firms, many of whom have recently opened offices here.

The trend doesn't bother Wagenknecht, who said his business continues to flourish and has even grown lately.

"The small biotechs, they don't have a lot of money, so they're really cost-conscious," he said. "I don't think (large firms) can compete on price. I just try to provide a good value. Once you provide a good value at a reasonable price, people will come."

He said it helps his business that he still has friends and former colleagues at UCSD, the Scripps Research Institute and several startups.

"I'm already in the circle of the biotechnology community," he said. "It can be a difficult community to get into if you're not from San Diego."

The entrepreneurs he's dealt with are usually involved with more than one venture, which helps grow Biotech Beach Law's client list.

"A lot of these guys, they jump around from company to company," Wagenknecht said. "So once you do good work for one, you're probably going to get work with another."

He also is seeing an increase in work for European companies.

Besides the work he does for his firm, Wagenknecht has worked with the San Diego Inventors Showcase, an event where high school and elementary students develop their own inventions. He's also worked with VentureForth, an entrepreneurial student organization at UCSD.

"You're obviously trying to serve the San Diego technology groups," Wagenknecht said, "but you're also trying to encourage innovation, even with the younger-aged folks."