By SYDNIE MOORE, Special to the Daily Transcript
Thursday, March 27, 2008

Hackers are exploiting the Internet in unprecedented numbers. In fact, according to Consumer Sentinel, a complaint database maintained by the Federal Trade Commission, identity theft is the fastest growing crime in the country, with reports of stolen identity comprising 32 percent of the more than 800,000 fraud complaints filed last year.

The bottom line? With a whopping 250,000 cases reported in 2007, all consumers are vulnerable to identity theft -- especially if they use the Internet.

According to Camaisa, safeguarding your personal data is "just as critical as locking your front door." 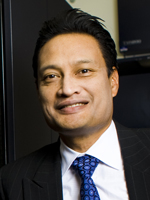 The founder of High Technology Solutions Inc. (HTS), a hugely successful enterprise that provided communications systems, engineering and outsourcing to the federal government, Camaisa is well equipped to achieve his goal of establishing Anakam as a formidable domestic force, with an eye on the global market. Under his tenure, HTS grew to over 400 employees strong, boasted annual revenues exceeding $45 million, and accrued a slew of honors, including listings on Inc. Magazine's Top 500 private companies and the Governor's Small Business of the Year Award. He went on to raise $17 million in Venture Capital in 1999 to launch an Internet subsidiary (Eye Velocity) focused on Internet visualization.

Yet after selling HTS in 2004 to Wireless Facilities for nearly $49 million, Camaisa claimed he was "ready to retire."

In reality, retirement is anathema to this visionary Southern California native, who was born in Long Beach but grew up in Bonita.

After realizing that too many people were mired in "security" passwords -- which aside from being inconvenient, are easy for hackers to eventually decipher -- he honed in on a distinct market niche.

Utilizing his keen business acumen, he laid the groundwork for Anakam, a provider of end-to-end security for companies and government agencies that need to provide secure access to Web sites and internal applications. He recruited a top-notch management team with expertise in four key vertical markets: health care, government, banking/finance and e-commerce.

With 35 employees in offices in San Diego and Arlington, Va., Camaisa's latest endeavor is aimed at providing cost-effective authentication and identity protection solutions, with the potential to service millions.

His company now markets a comprehensive combination of patent-pending tools -- including two-factor authentification through the use of existing devices such as cell phones, remote ID proofing, data protection and system administration -- to a variety of government agencies and businesses, among them hospitals, Web portals with online records, citizen immigration services and public health agencies.

Camaisa said the health care industry, in particular, is a ripe target for hackers.

Not surprisingly, Anakam's business is booming. In fact, Camaisa said, "We're expanding at a rapid clip, and are going from 2007 to 2008 with a 300 percent growth rate."

Camaisa attributes the company's resounding success to his product's simplicity, versatility and affordability.

"We are an over-deviced society, but Anakam's technology leverages the current devices that are out there, allowing consumers to log in anywhere and attain secure Internet access," he explained.

Users enter a cell or home phone number or private e-mail address, and send it through a different vector so it cannot be hijacked. This way, he said, "We've added another level of security to the mix -- a roadblock to the intruder so passwords cannot be compromised.

Camaisa said his product is unique: "We are the only company to offer such a comprehensive security solution. No one else has such a complete identity management platform information."

With an impressive track record and impeccable credentials, Camaisa is qualified to combat online fraud -- and to take on the challenge of building another Inc. 500-caliber company. He graduated from the United States Naval Academy, earning a bachelor's in engineering, and received further training at Harvard Business School's executive program. As founder of HTS, he was awarded the Ernst & Young Regional Entrepreneur of the Year and the SBA Small Business Person of the Year awards.

Ideally, this astute entrepreneur will make an important difference in the ongoing battle against online fraud. Internet theft, he says, is "subtle and ingenious," and ultimately can cause irreversible harm.

"We (at Anakam) are basically providing authentication for the masses, allowing more people, easier access to better security."