Experts: Capital still available, though sublease space on the increase 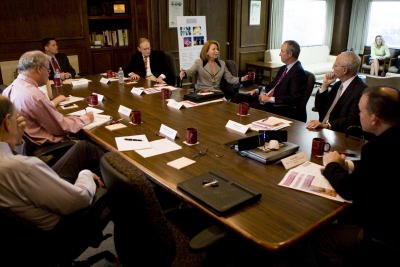 San Diego is poised to open millions of square feet of office space, the amount of sublease space may be greater than it has ever been and capital, while more difficult to obtain, is still available for the right projects.

Assessments of the county's office, retail and apartment markets were made during a recent roundtable discussion held at the Transcript offices.

"There's a lot of shadow space out in the market right now," said Scott Biel of the law firm of Mintz, Levin, Cohn, Ferris, Glovsky and Popeo, which sponsored the session. "We're seeing a lot of sublease space."

John Jarvis of the Irving Hughes commercial brokerage firm agreed, saying he can't remember a time when there was more sublease space on the market.

Biel added that a great deal of this space is a result of consolidations in the biotechnology industry.

Rick Vann, executive vice president of Sunroad Enterprises, said there is still liquidity in the market, but whether or not these funds will flow to commercial real estate in the near-term remains an open question.

Lynn LaChapelle of the Jones Lang LaSalle commercial real estate firm said there are "buckets of capital," but these investors may be restricting their purchases to trophy assets such as large and big-name Class A office buildings.

While there has been little change in the interest rates for these assets, LaChapelle said, buyers are generally faced with 55 percent loan-to-value financing rather than the 75 percent to 80 percent LTV they were accustomed to receiving about 18 months ago.

"These high-octane buyers are effectively out of the market," she said.

As in past slowdowns, Vann said, what he referred to as "the amateurs" will be weeded out of the commercial real estate market.

"Do you have real equity to put into an asset and can you hold it? That's where the pros prevail," Vann added.

LaChapelle, who helps lead the Capital Markets Division of Jones Lang LaSalle, said San Diego has evolved from a market where most of the commercial property buyers were local, to one that is much more institutional in nature.

Still, as evidenced by The Irvine Co.'s propensity to acquire office buildings throughout San Diego -- along with plans for a new office tower at 700 W. Broadway -- investors don't have to come from Wall Street to be major players here.

"We still have investors that have staying power here," he added.

Yet Vann said the barriers to entry are so difficult that it's hard for an office developer to even get into the market here.

Still, that doesn't mean you can charge anything for rent. Jarvis believes there has been a fundamental paradigm shift in the market, meaning landlords have no reason to expect they can get a $4 per-square-foot rent even though that's what a pro forma says.

Although rents may dip in a soft market, said Don Zech of CDC Commercial, in time they will always rise to meet replacement costs.

Companies with offices in Del Mar Heights, where the rents are around $4 per square foot, are happy to pay the premium because they don't have to commute so far from their homes, noted LaChapelle.

"Rent is such a small line item in the expenses. The salaries are so much a greater part," LaChapelle said. "Look at what has happened in Santa Monica. They are getting $6 and $7 rents (per square foot) because people don't want to get on the (Interstate) 405."

LaChapelle said a way of lessening the rent expense is to put people in smaller spaces -- perhaps five per 1,000 square feet instead of four. That, she says, would effectively lower the $4 rent to $3.80 per square foot.

An ongoing question raised here was how the steep drop in the residential market will impact the commercial sector.

"The housing market is going through what the commercial market went through in the 1990s," Zech said. "You can still get 65 percent loan-to-value, and there's still a lot of patient money out there."

But Alan Nevin, of MarketPointe Realty Advisors, said even if a million square feet of space is absorbed each year, it will take several years to absorb the millions of square feet under construction or in the near-term pipeline in such places as Carlsbad and along the Interstate 15 Corridor. "Reno (Contracting) has a million square feet (of office space) being built, and that's just one construction company," Nevin continued.

He said the problem is that we are simply not generating enough new jobs -- only 10,000 to 15,000 per year this decade -- to fill all that space. The upside, he added, is that while San Diego is feeling the effects of the economic slowdown, the city fortunately doesn't have too many large companies that could drag the whole economy down.

Nevin, who has been through no fewer than three recessions plus the current slowdown, believes recessions sew the seeds of the next boom. He suggested that while everyone continues to build Class A office space, "what's needed is a boatload of B space" for smaller start-up companies.

Carrying costs could become a problem for landlords with a lot of space to fill, and LaChapelle said commercial property owners may have to sell some of their assets to cover their debt service.

This could also happen in retail if and when shopping centers lose their anchors.

"The Ralphs closed on Convoy ... Albertson's has had some closings. There could be a lot of shopping centers with empty space," Nevin said.

On the apartment side, vacancies remain at less than 4 percent and rents have continued to rise. While some condominiums are reverting back to apartments, Nevin said this is more than offset by renters who can't qualify for homes and the relative dearth of apartment construction.