Top commercial broker happy to be in San Diego

It has been quite a journey for Kraig Kristofferson from a Ross Perot employee to one of the top commercial brokers in the country.

While Kraig Kristofferson has been one of the top CB Richard Ellis brokers in the country for much of the last 35 years, he never expected to land in the commercial real estate arena.

Kristofferson, a CBRE senior vice president, had worked for Electronic Data Systems under Ross Perot. Then he decided to come to San Diego in the early 1970s -- having fallen in love with the city during his time a naval aviator.

When an acquaintance steered him to commercial real estate, he was hooked. 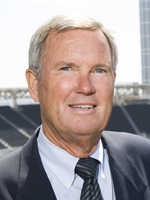 "It was January 1973. I had a brand new baby, and no prior experience, but the world was my apple waiting to be picked," Kristofferson said.

Around that time, Kristofferson sold the "wedding cake" building on Sixth Avenue to Harcourt Brace Jovanovich. Years later, Kristofferson helped move the publishing firm into the Golden Eagle Plaza Building at 525 B St.

Kristofferson also later sold the land to Cabot, Cabot & Forbes, for the office tower now known as the 550 Corporate Center.

On the leasing side, he has handled brokerage services in more than 700 lease transactions representing in excess of 4.27 million square feet and $580 million worth of aggregate rent.

Kristofferson has been a broker on 87 sales downtown, representing an aggregate value of more than $1.03 billion. He also has been involved in the leasing and sale of $3.1 billion in sales and leasing transactions throughout San Diego County.

Kristofferson has handled brokerage services in connection with the sale of some of downtown's most prominent buildings including One America Plaza, the Koll Center, Wells Fargo Plaza, First National Bank Center and the Advanced Equities Plaza Building at 655 Broadway.

He handles leasing for DiamondView Tower (CB Richard Ellis has offices in the building overlooking Petco Park), 550 Corporate Center, 555 West Beech and Civic Center Plaza, among other buildings. He has actually handled the leasing for Civic Center Plaza building -- formerly known as the Security Pacific Bank Building -- nearly all his professional career in San Diego.

If anything surprises Kristofferson, it is the phenomenal prices that downtown buildings are garnering these days. During a 10-year period from 1996 to 2006, what is now known as the Merrill Lynch Building saw its price rise from $39.1 million to $224 million. That translates into a hike from $72 per square foot to $413 per square feet just a decade.

The Merrill Lynch Building wasn't the only property to see skyrocketing prices. The Irvine Co. would buy six downtown buildings over the course of three years, including One America Plaza in February 2006 for $300 million. The 543,020-square-foot asset had sold for $166.2 million in November 2002.

When asked about the leasing market in this dubious economy, Kristofferson said Diamondview's office tower is better than 91 percent leased, though some other buildings aren't doing nearly as well.

He wondered aloud about what rents might have to be charged at The Irvine Co.'s planned 685,000-square-foot office tower at 700 W. Broadway. That could take several years to fill at present absorption rates, but he said it was difficult to tell what the market may look like in 2011 or so, when the project is slated to open.

Kristofferson did say that office absorption has been strong in the suburbs. However, with millions of square feet coming on line in places like Carlsbad and the Interstate 15 corridor, those locales could take some time to fill as well.

After spiking significantly, rates have settled down in the last 18 months. Even with the extra space, Kristofferson said rental rates are mostly flat. In some isolated pockets, such as Del Mar Heights, the rents have hit as high as $5 per square foot -- rents that, at least for now, would be unimaginable downtown.

Still, it remains a tenants' market. This means tenant improvements at a time when construction costs have soared.

Kristofferson said some free rent is being given as well, but not much.

"It's typically no more than one month per year per transaction, and usually less," he said.

While tenants will almost always be found for the highest quality space, Kristofferson said plenty of opportunities exist in Class B buildings for those looking for more affordable options. Despite the fact that the buildings are older, he said, they have often undergone renovations to make them more attractive.

"The fun part of this business is dealing with all these sophisticated tenants who have diverse needs and products. And it's a different space every time. There are no two alike," Kristofferson said.

While Kristofferson relishes what he does, he does have concerns about the current economy. He worries that the meltdown in the housing market could hurt the commercial markets as well.

"People are losing their homes, companies are laying off ... one thing feeds on another," Kristofferson said. "It's going to be a tough time, but we're lucky to be in San Diego. We have a diversified job base and we still have a better rate of job growth than the state and the rest of the country."