By CHRISTINA YATES, Special to the Daily Transcript
Tuesday, April 8, 2008

The US Grant, a Luxury Collection Hotel, recently announced that it was awarded Best Luxury Guestroom Design at The HotelWorld Global Hospitality & Design Awards competition in Las Vegas. Located in the heart of downtown San Diego, the historic US Grant hotel reopened in October 2006 after a meticulous, $56 million renovation. More than 3,000 hotels worldwide were considered for the prestigious design award at HotelWorld's international design competition, sponsored by Hotel & Motel Management, Hotel Design and Luxury Hotelier.

Owned by the Sycuan Band of the Kumeyaay nation, The US Grant was one of three other illustrious nominees in the Best Guestroom Design category for the luxury segment, including: the Ritz Carlton Sharq Village & Spa, Doha Qatar in the Persian Gulf; The Alexis Hotel in downtown Seattle; and The Cove at Atlantis in the Bahamas. 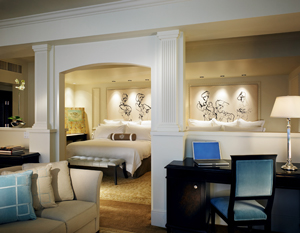 The US Grant renovation aimed to retain the hotel's historical ambiance while creating a more contemporary hospitality environment.

"We define The Luxury Collection by our guests and the experiences and services they demand and expect. Nothing less than an exceptional level of service, perfect location and indigenous personal offerings will do," said Ross Klein, president of Starwood Hotel and Resort's (NYSE: HOT) Luxury Brands Group. "We are honored to win this prestigious design award on the heels of a remarkable renovation of this majestic property. This honor is a tribute to our owners and the incredibly talented team of international designers who worked to re-imagine the property. The US Grant is a jewel in The Luxury Collection crown."

Commanding the heart of vibrant and dynamic downtown San Diego, The US Grant retains the region's legendary reign of superior luxury and warm hospitality. Built circa 1910, an unprecedented $56 million dollar renovation completed in 2006 has captured the historic ambiance of this landmark property.

Design challenges included retaining the historical ambiance and designations that placed the hotel on the National Register of Historic Places in 1979, while creating a more timeless and contemporary hospitality environment that would move The US Grant to international recognition and acclaim as a luxury destination.

Volumes of historical information served as a foundation for weaving in 21st-century textiles, technology and design with turn-of-the-century character and nine decades of history. In addition, this project benefited from a massive renovation and retrofitting in the early 1980s that gave The US Grant a contemporary floor plan of uniform king- and double-bedded rooms along with a large volume of unique suite designs.

The ultimate goal was to make each guest's US Grant stay truly one-of-a-kind by creating a significant guest room design with original art that could not be replicated in the industry and would incorporate the historic architecture of the 11-story Beaux Arts hotel.

An international team of architects, artisans, designers, craftsmen and master builders was assembled to recreate the iconic hotel over a 21-month period.

The US Grant guestrooms were envisioned around a theme of "Sleeping with Art" originally presented by French interior designer Frederic Marq. Local resident Deniece Duscheone was instrumental as the lead renovation project manager and designer ensuring a timely and successful reopening in October 2006.

The hotel's owners commissioned nine noted artists of European, American and Native American descent to create a vibrant collection of new paintings, sculptures, murals and ironwork for the hotel's public and private spaces.

The headboards of nearly every guestroom (with the exception of the Presidential Suites) are authentic drip paintings by noted French artist Yves Clement, each painted on property during the project. The commissioned black oil-on-canvas, avant-garde paintings are mounted on period piece architectural moldings. Clement's paintings, under the signature of Clement LeGrand, lend an unexpected touch of modern élan to The US Grant's historic guestrooms.

Original works by Native American artist Gene Locklear decorate guestroom foyers and bathrooms. Locklear's previously commissioned art clients include The White House, The Pentagon, the National Football League, the PGA and the History Channel. Duscheone asked Locklear to create 300 different representations of Kumeyaay life from the 1700s to the 1900s in a modern abstract style for the hotel's guestrooms. These finished works are now some of the few known depictions of the history of California's Native Americans.

Accomplished mixed media artist and San Diego native Marie Najera was commissioned to create 20 different pieces on wood and canvas for the hotel's Presidential Suites, Penthouse & Signature Suites. As she explains it, her very detailed work is about layering colors on wood and wax and then carving out a unique line drawing through the many layers. The goal was to create each guest accommodation as its own destination; in fact each suite was assigned its own shade of blue for wall coverings, carpets, etc. Najera was asked that her individual pieces use the special blue of the suite where each would hang.

The 11-story, 270-room hotel offers 47 stunning suites that range from 400 to 1,300 square feet among five different configurations. Having played host to 13 different U.S. presidents since opening in 1910, The US Grant offers three presidential-caliber suites designed to meet the Secret Service's current standards for hosting U.S. presidents and international dignitary.

Guestrooms on the 11th floor and specific suites have been designed to accommodate unique in-room spa services. The US Grant offers San Diego's only custom-designed Event Planner Suites, which feature separate sleeping and business accommodations and include a conference table and technical enhancements.

With such stunning accommodations, the landmark hotel is now a favorite of VIPs and celebrities visiting San Diego.

In December 2003, the legendary property was purchased by the Sycuan Band of the Kumeyaay Nation. The Native American tribe originally settled on the land that now includes downtown San Diego where The US Grant resides. Sycuan's purchase of the hotel represents an ancestral tribute to its local legacy.

President Ulysses S. Grant passed an Executive Order in 1875 that set aside 640 acres of East County land for the Kumeyaay Tribes and granted them sovereignty. More than 100 years later, the gaming wealth garnered from that land has allowed the tribe to restore the historic hotel to its original splendor and beyond. Sycuan announced that in 2008 it will further enhance the property by adding a three-story spa with an indoor pool, as well as a signature art gallery.