It's not everyday one meets a compassionate, enthusiastic man wearing a hardhat.

But for Wayne Hickey, combining family and work, creating a quality office environment and trying to be the best contractor makes him the right fit as chief executive officer of ROEL Construction Co.

Hickey started in the construction industry by working for a carpenter after graduating high school in 1976. His contacts in the industry led him to ROEL Construction in 1993, where he was hired as a senior project manager.

At the same time, Qualcomm Inc. (NYSE: QCOM) contracted with ROEL to build its headquarters. Hickey was assigned to the project and spent his first seven years employed with ROEL exclusively at the Qualcomm site, managing one of his company's biggest clients. 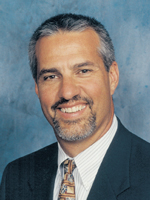 When the Qualcomm project was complete, Hickey returned to the office and has since become instrumental in growing the company into the western United States. ROEL opened an office in Palm Springs in 1995 and Las Vegas in 1997. Offices in Irvine and Arizona followed.

"We're a small company that has the ability to do big work," Hickey said. "The company truly is starting to mature and grow. We're changing from a family-owned and operated business to a privately held company."

As CEO, Hickey wants the company to dig its heels deep into the West and build a reputation of quality, as it has done in San Diego. He understands that the company shouldn't spread itself too thin, but ROEL has experience in handling large projects with quality service, he said.

The company is currently working on the Quechan Casino Resort. With a price of $126 million, the contract is the largest design/build project to date for ROEL. The project is located about six miles west of Yuma, Ariz., near Interstate 8 on the Fort Yuma Indian Reservation in California. Hickey is excited because the casino will be a landmark on the I-8 that will be visible for miles. Construction started in October 2006 and completion is scheduled for the end of the first-quarter 2009.

Other ROEL projects include the Barona Casino in Lakeside, improvements and construction at the Del Mar Racetrack, the Discovery Business Center in Irvine, Calif., and numerous banks, fitness centers, churches and car dealerships.

In all, ROEL Construction has built projects from Washington to Utah to New Mexico.

"Our intent is this: We want to be the best place to work and we want to be a solid company," Hickey said.

The company's expansion is turning Hickey inward, however, and he is making sure that the 300 employees of the growing company still feel like they are part of the family-owned business Tom Roel founded in 1917 in North Dakota. The company moved to San Diego in 1959.

Four ROEL generations have held leadership positions in the company, and more than a 100 of ROEL's employees have a history of service that spans generations.

Hickey was named CEO in 2005, and is only the second chief executive in 90 years that has been unrelated to Tom Roel. While he lacks the bloodline, Hickey understands the family spirit. ROEL has 10 ideals that govern the company: client satisfaction, integrity, teamwork, family traditions, quality, enthusiasm, professionalism, safety, community service and honest profit.

Hickey strives to epitomize those ideals at work and in his personal life. He is a husband and a father, and gives back to the community through the Alpine Challenge cycling ride through East San Diego County. He helped organize the ride to raise money for Rady Children's Hospital. Cancer claimed the life of Hickey's brother and the hospital treated Hickey's niece 22 years ago when she was diagnosed.

"Out of all that, I wanted to give back," he said.

ROEL Construction just celebrated its 90 anniversary, and Hickey sees himself as part of the 100-year celebration as well.

"I just truly want to be the best contractor," he said. "I want to bring the company to it's full potential."

He strives to make ROEL a great place to work by placing his employees where they use their strengths and feel empowered. Employees get their birthdays off too, said Hickey, who is always trying new things to encourage retention and satisfaction.

Though the construction market is slowing, ROEL isn't worried. The company is diverse, skilled in tenant improvement work and armed with a surety support team that can take over distressed projects and offer expert testimony. When the market becomes soft, Hickey said contractors often bid too low on projects, and then they fail. In those cases, ROEL is prepared to take over.

"We will always be your solution; we will never be your problem," Hickey said, emphatically.