By JAN PERCIVAL, Special to the Daily Transcript
Thursday, April 17, 2008

Removing decades of neglect to the Chollas Creek Encanto Tributary and creating a beautiful natural setting for the Diamond Neighborhoods of southeastern San Diego was a fulfilling job for the excavation company that calls this community home.

"It was great transforming what had been an eyesore in a pretty bad situation into a beautified area," said Steve Groves, president of Cats Excavating and General Engineering.

Cats served as the general contractor on the $2.85 million, 1.85-acre project, with Cats' contract on the work totaling $1.6 million. The company removed tons of concrete and debris, realigned the channel of the creek bed, and installed the grade control structures lining the channel like rip-rap and cobble rock. 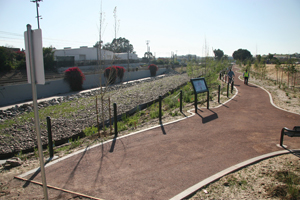 This was Cats' first job as general contractor and its first on a project of this kind. It was yet another sign of progress for the minority-owned contracting firm that only nine years ago was a three-man shop with $200,000 in revenues. Cats now has 20 employees and records annual revenues as high as $5 million.

Cats is truly a home-grown business in the Diamond Neighborhoods. Born and raised in the San Diego Fourth City Council District, brothers Groves and Cliff Smith took up leadership of the heavy-equipment rental company their father started in 1953 and left to them when he died in 1992. The name was changed to Cats (short for Caterpillar) Excavating, and has been in operation ever since. Smith serves as the vice president and Groves' wife Nita and oldest son, Steve Groves, II, all work together in the business. Their families even live next door to each other in Encanto, just down the street from their mother.

Cats' recent growth was a direct result of its participation with the Jacobs Center for Neighborhood Innovation and the resident-led construction team that built Market Creek Plaza. The plaza was planned, designed, leased, built, and is now owned and operated by teams of community residents. During construction, the plaza's developers, JCNI, set and surpassed its goal for the participation of minority and woman-owned contracting firms. Of the total contracts, 83 percent went to local emerging firms -- like the nearly $1 million grading contract to Cats. It was, for many, the largest contract they'd worked on in their companies' histories.

Bridging the gap for small, emerging contractors between small and large contracts was a major goal for the Market Creek Plaza construction team, which sought to remove the barriers to growth through assistance in lines of credit, bonding, and technical and administrative assistance. Training on the business side of contracting, mentoring relationships and lines of credit guaranteed by a program-related investment from the Jacobs Family Foundation helped these contractors grow their businesses while working on the plaza and establish their own relationships with banks and bonding companies. 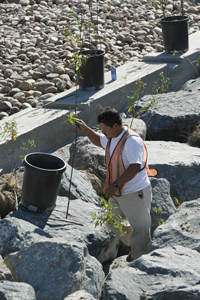 Work on the project included removing concrete and debris, realigning the channel, lining it with riprap and installing plants.

"This became a real resume-building project for these small contractors," said Rickey Laster, president of the MultiCultural Contractors Group, one of the groups that participated on the construction team.

The work on Chollas Creek was the company's most complex project yet, serving as the general contractor and hiring and managing the work of the subcontractors -- 90 percent of whom also are from the community. Subcontractors performed the work on the vegetation, landscaping, concrete and some of the underground work to realign an 18-inch sewer line.

"The meltdown of the housing market is forcing contractors like us to diversify into other areas of construction. It is definitely a good feeling for us to know we can do general engineering and hire and manage the subcontractors for work we don't perform ourselves. And just like the opportunities that were opened to us, we are committed to hiring local contractors and laborers from this community whenever possible," Groves said.