Construction is nearing completion on the La Jolla Commons Office Tower, one of San Diego's most prominent new Class A office projects on the market, and leasing activity is heating up with the first major lease now complete.

Paul Hastings, an international law firm currently located in Del Mar Heights, is relocating to La Jolla Commons with a recently completed a long-term lease for 55,600 square feet on two-and-a-half floors. This significant move represents the first time a law firm has relocated from Del Mar to La Jolla.

According to Grubb & Ellis|BRE Commercial's Rick Reeder, SIOR, part of the exclusive leasing team for La Jolla Commons along with Dave Odmark, this move by Paul Hastings demonstrates the notable impact that the addition of La Jolla Commons has made in the area as the first new Class A office tower in the University Town Center (UTC) area in more than a decade. 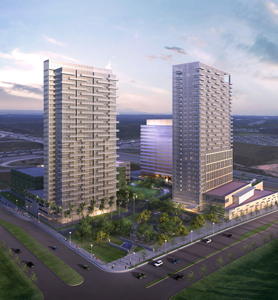 The mixed-use, 12-acre campus at La Jolla Commons will include a 310,000-square-foot office building plus twin towers combining hotel and condominium components.

"Paul Hastings has focused on growing our core practice areas that allow us to serve both technology and life science companies as well as global clients that are based in San Diego," said Carl Sanchez, chair of the Paul Hastings San Diego office. "Our expansion to a larger office demonstrates our long-term commitment to the San Diego business community. The sophisticated new office space mirrors our standard of providing sophisticated legal advice and a high level of client service."

Exterior glass at La Jolla Commons has been installed and construction is now estimated for completion this summer.

The average floor has 24,000 square feet of rentable space, which makes the project appealing to a variety of potential businesses.

With its distinctive architecture, efficient building systems and prominent location, La Jolla Commons is expected to draw tenants from across the nation and will be among the city's most distinguished and desired office locations. The soft, white illumination of a single vertical line of LED lights will adorn the east and west faces of the building to distinguish the eastern gateway of the UTC Triangle.

"The legal talent within Paul Hastings deserves a workspace that will facilitate deeper client and institutional relationships by the nature of their work environment: efficient space planning and information flow, more natural sunlight, and cleaner air," said Hines Vice President Paul Twardowski. "This building was meticulously designed with firms like Paul Hastings in mind."

The project has received Silver-level pre-certification in the Leadership in Energy and Environmental Design Core and Shell (LEED-CS) program, sponsored by the U.S. Green Building Council (USGBC), for its first-class construction and state-of-the-art operating systems. The building's exterior is made predominantly of glass curtain-wall system incorporating insulated double-panned glass with a clear, low-emissivity coating, while the highly efficient floor plates and operating systems ensure ultimate performance.

Gillooly is the public relations manager for Grubb & Ellis|BRE Commercial.