LNCs support military nurses who care for our wounded warriors

The Philanthropy Committee may have gotten a slow start in 2008, but it had an impressive year-end finish! Patty O’Sullivan started the year as the committee chair and began researching projects our chapter might get involved in that would support our deployed troops. Due to a family emergency, she had to step down as chair so I agreed to fill that position and attempt to carry on her vision, which was of special interest to me since I have been a volunteer with a non-profit organization that supports our troops for the past three years.

I asked one of our local attorneys, Dennis Schoville, if he and some of his colleagues who are Vietnam vets, might want to partner with us in our efforts. He had an even better idea, which was to partner with the San Diego Veterans Museum and Memorial Center (SDVMMC), as he serves on their Board of Directors. He has many interesting stories from his service in Vietnam as an Army medevac helicopter pilot who was shot down six times and who was cared for by military nurses on several occasions. He suggested that we might focus on military nurses, since they have a truly difficult job, yet rarely receive much recognition or support. We presented our idea to the SDVMMC Board in September, after which they formed the Combat/Military Nurse Support Committee, which would work in concert with our Philanthropy Committee. Since then, the philanthropy projects have taken on a life of their own and have already far-exceeded our expectations! Mr. Schoville developed and sent out a letter to solicit funds for our projects from friends and attorneys in San Diego and some of our AALNC members also made financial contributions, all of which totaled almost $2400 by November.

From September to November 2008, our joint committees carried out four rewarding projects to support our military nurses, local and deployed, as highlighted below.

Holiday Donations for Nurses at Landstuhl 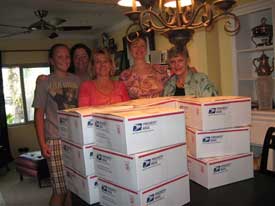 Landstuhl Regional Medical Center is a U.S. Army Hospital in Germany which serves all branches of our armed services. Our seriously injured and ill troops in Iraq and Afghanistan are medevac’d and treated there prior to transport to the U.S. or back to the war zones. The nurses and other health care professionals at Landstuhl have a constant turnover of seriously injured (mostly) young troops and need periodic morale boosts to combat compassion fatigue. Therefore, in October we launched a drive for donations of coffee (one of the top requests!), healthy snack items, not-so-healthy holiday candy and snacks, holiday (and other) DVDs, CDs, board games and personal holiday cards for the staff and injured troops. Our chapter members responded with bags and boxes of donated items and some made monetary donations.

On 11/15/2008, several of our committee members had a packing party at Nancy Blevins’ home and, in 45 minutes, packed 19 boxes of holiday items (see photo). They were sent to our Landstuhl contact, MaryAnn Phillips, who is with Soldiers’ Angels – Germany. She confirmed by e-mail that all packages had arrived in good shape in early December and they were amazed at the number of boxes and items we had solicited and sent! She and a volunteer purchased some medium-sized baskets at the BX and filled them with our items before distributing them to the nurses on several of the units. They were told to contact her when they ran out and she would re-supply them, since we had sent so much. The nurses were amazed and touched that we had thought of the caregivers and recognized their efforts, as numerous groups send things for the troops but no one had ever sent things specifically for the health care professionals. We hope to send more this year to boost their morale and remind them that people here do appreciate the care and treatment they administer to our wounded warriors.

Captain Bonny Schofield, Director of Nursing Services at Camp Pendleton Hospital, is a graduate of the Legal Nurse Consultant Certificate Program at UCSD and did her internship for that program with Mr. Dennis Schoville’s office (small world!). I contacted her to see if any of the nurses might want to speak at one of our educational meetings about their experiences in Iraq or Afghanistan and she put me in contact with Commander Sandra Mason, a Navy nurse who had recently returned from a 12-month tour in Afghanistan as a member of a medical team tasked with mentoring Afghani health care workers in an Afghan Army hospital that was built by the U.S. CDR. Mason did an interesting and insightful presentation at our September educational meeting regarding her experiences there. When I asked if there was anything our chapter might do to help the team that replaced hers, she immediately stated that they desperately need nursing textbooks for the Afghani nurses. We learned that used textbooks in English and several years old were just fine for their purposes, as the Afghani nurses want to learn English and their medical practices are at least decades behind ours. We therefore launched a drive for donations of used nursing textbooks and the response has been tremendous, with many of our members also soliciting donations from nursing colleagues who are not LNCs. Our first two boxes were sent in early December and are now in the hospital library at that Army hospital in Afghanistan. Donations continue to come in and this will probably be an ongoing project. Another shipment will be sent in February 2009. The U.S. Navy nurse who received them, CDR. Kim Lebel, sent an e-mail confirming their arrival and expressing their thanks. 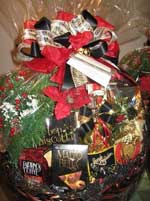 We felt it was important to show our support for our local military nurses, many of whom have been deployed to war zones, and who care for our injured troops once they return to the San Diego area. Using approximately $1500 from the joint fund for these projects, we worked with Amy Lind (an R.N.), who is also an entrepreneur and owns The Basket Corner in Alpine, to create festive holiday gourmet baskets for some of the nurses at the San Diego Naval Regional Medical Center and at Camp Pendleton (see photo). Amy did a beautiful job and worked within our budget and, on 12/19/2008, baskets were hand-delivered by myself and Mr. Schoville to nurses at Camp Pendleton Hospital in the Emergency Department, the ICU, and the Med/Surg Unit. Captain Bonny Schofield accompanied us to each of those units. (see photos) On 12/22, a very rainy day, we also hand-delivered baskets to the nurses at the Naval Hospital on 4E, the unit that cares for the most seriously injured of our troops from Iraq and Afghanistan (see photo with a large group of nurses and corpsmen) and to the Comprehensive Combat & Complex Casualty Care Unit, which is involved in the rehabilitation of our troops injured in combat.

On 12/23, I hand-delivered our final basket to the nurses at the Enhanced Intensive Outpatient Program on Camp Pendleton, who work with the troops suffering from combat PTSD and/or have substance abuse issues, problems which often occur concurrently. 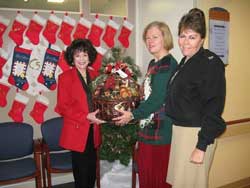 All recipients were very appreciative! 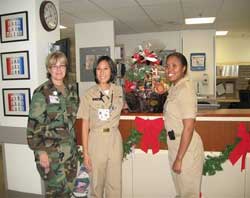 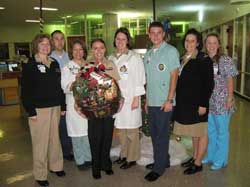