Real estate market called more difficult than ever before

By THOR KAMBAN BIBERMAN, The Daily Transcript
Friday, May 2, 2008

The sentiment was unanimous. There has never been a residential real estate market in a generation more difficult than today.

The health of the residential real estate industry in San Diego was addressed by homebuilders, a real estate broker, a lender and others during a roundtable discussion at The Daily Transcript offices Friday.

"I've never seen a market like this before and I've seen four different recessions," said Ure Kretowicz, a principal with Cornerstone Communities. "This time the market has been hit with one barrage after another."

These hits have ranged from a relative wave of foreclosures, to the credit crunch. For builders, it has also meant construction material prices that may have doubled within the past five years. 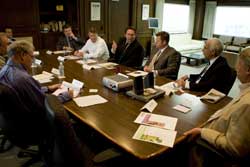 The health of the residential real estate industry in San Diego was addressed by homebuilders, a real estate broker, a lender and others during a roundtable discussion at The Daily Transcript offices Friday.

Rick Hoffman, president of Coldwell Banker Residential Brokerage San Diego, said while he has seen some indications that the market is improving, it could be one to two years before it gets all the way back.

Tom Archibold, Hallmark Communities executive vice president of sales and marketing, said the other big problem is that lenders have been overwhelmed with the challenges of loaning money in such a dubious financial climate.

Brian Ellis, a Countrywide Financial Corp. lender who spent many years at Washington Mutual, said after taking stock of the situation, his former employer completely shuttered its wholesale and retail operations in recent months, resulting in the loss of thousands of jobs across the country.

Last year, Countrywide had been making about $41 billion worth of loans per month. Enough of these were of the subprime variety and of questionable health, and Wall Street became worried about the potential for defaults, many of which were already happening. This also meant lenders didn't want to loan to Countrywide to keep the firm operating and the loans ground to a halt.

Bank of America (NYSE: BAC) has agreed to buy Countrywide for what was originally billed as $4.1 billion in stock, but could be considerably less depending on the stock price.

While it appears the struggling lender has a new lease on life, Countrywide posted a loss of $893 million in the first quarter of 2008 alone. In short, Countrywide needs that merger to happen or there could be one less major influence in the home lending business. About 43 percent of Countrywide's $87 billion loan portfolio is in California.

Ellis said the biggest mistake that lenders made during the past 18 months or so was to provide 100 percent financing.

Robert Laing, president of Barratt American's Urban Division, said his biggest complaint was "Wall Street pumped in so much liquidity it ruined the market."

While the availability of capital may now be doubtful, steel and concrete prices may be high, and the market may be in a downturn unlike anything before, the panelists were generally upbeat about the future. They just don't know when that turnaround might happen, however.