Throughout the United States, public-private partnerships -- joint ventures between cities and private companies -- are an increasingly popular way to build complex, sustainable urban developments. They offer city officials flexibility and efficiency in the use of resources, access to private capital, enough oversight to achieve public objectives and significant risk mitigation.

With its new downtown civic center and city hall, San Diego has the opportunity to show the world how to do them even better and greener. Its success depends upon both entities, the public and the private, sharing the same commitment to the city and what it could be.

Every resident of San Diego is a stakeholder in this project. The buildings will be public. How they are built, maintained and landscaped will affect city residents in everything from their pocketbooks to the air they breathe. And they will represent San Diego to others. As such, it makes sense to involve as wide an array of city officials, households and employees in the process as possible.

In projects up and down the West coast, broader public involvement and more in-depth dialogue yields significant rewards in the form of clear design and development direction, and a list of tangible deliverables. Through this collective effort, the public, governing agencies, developers, investors, architects, business owners, educators, students and professionals can collectively advocate for and demonstrate their commitment to smart, sustainable urban planning and architectural design. 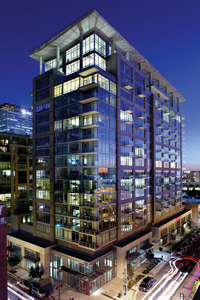 Luma is a 19-story, mixed-use residential tower in downtown Los Angeles developed by Gerding Edlen. The building is on track to receive LEED Silver certification by the U.S. Green Building Council.

It is also important to establish a green building program and policy like that proposed by the Centre City Development Corp. (CCDC), which includes such elements as:

* Grants and commissions; and

Until such programs and policies are in place, public-private partnerships struggle to take projects to a deeper shade of green because of conflicting codes and contradictory guidelines. Additionally, cities are always at risk of being green-washed by developers who promise more than they are capable of, or willing to deliver.

Many large cities also are embracing innovative programs to attract and encourage sustainable development. Seattle, for instance, has created a $5 million green building fund for private projects, as well as providing financial, height and density bonuses for public-private endeavors. In Portland, business energy tax credits and a streamlined development processes have created a surge of sustainable projects.

The Urban Sustainability Program will provide San Diego with a much-needed roadmap for green development. Given the energy and water issues facing southern California, generally, and the livability and climate benefits of San Diego in particular, the city is uniquely positioned to pave the way for more effective, more efficient public-private partnerships leading the way in sustainable development.

Cody is an executive at Gerding Edlen Development, a developer of many sustainable and urban reuse projects including the first LEED Platinum certified condominium building in the world. Gerding Edlen has been named a finalist for the new downtown San Diego Civic Center and City Hall Complex.