By BRIE IATAROLA, Special to The Daily Transcript
Thursday, May 8, 2008

Dismal reports may plague the residential real-estate sector these days, but Beth Fischer prefers to keep a positive perspective.

As president of the San Diego division of Pardee Homes, Fischer oversees all operations concerning current and future projects. The 48-year-old leader has come a long way since graduating with a bachelor's degree in economics from Xavier University, slowly scaling the corporate ladder in a male-dominated industry to become a top executive for one of San Diego's largest homebuilders. Pardee, a subsidiary of Los Angeles-based Weyerhaeuser Co. (NYSE: HYH), develops and builds new homes, apartments, master-planned communities and business parks in California and southern Nevada.

"My first job out of college was in economic forecasting in support of the real-estate division of a Fortune 500 company," said Fischer, who also holds an MBA from the University of California, Los Angeles' Anderson School of Management. "I have worked in a number of corporate real-estate positions and managed many aspects of residential and commercial real estate since then." 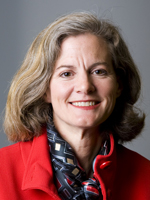 Through those management experiences, Fischer has learned "integrity means everything," and maintaining flexibility is equally as important. She also values optimism, an essential attitude to have as Pardee's primary moneymaker struggles to persevere in a market overwhelmed by negative press.

The Census Bureau's recent report, for example, indicated vacant homes for sale increased to 2.9 percent for the first-quarter 2008, and U.S. home ownership has stalled at 67.8 percent. Another report from the Commerce Department showed sales of new homes sunk in March to the slowest pace in more than 16 years. Though company policy prevented Fischer from releasing actual numbers, she noted Pardee's sales, revenues and the number of homes built have slid as well.

Even so, Fischer said according to the company's first-quarter analysis, three communities in San Diego -- Carmel Country Highlands and Pacific Highlands Ranch in the north coastal area and Ocean View Hills in the south -- continue to sell.

"Homebuyers recognize quality homes, superior locations and the opportunities presented in today's market," she said. "Many are buying and selling in the same market, which effectively eliminates the short-term market impacts. There are wonderful opportunities for buyers right now.

"It's a great time to buy your dream home."

Where and how to secure funding for that dream home may be an issue for some buyers, however. The mortgage crunch has created a profusion of problems that have had far-reaching effects in a current market that Fischer described as "credit constrained." To alleviate the crisis, she said she would like to see lenders communicate and respond quickly regarding credit and regulatory changes.

Despite the onslaught of challenges, after nearly 10 years of working for Pardee, Fischer understands market fluctuations characterize the homebuilding industry, and she has faith the economic climate eventually will change.

"Pardee Homes has been in San Diego for 54 years and seen a number of market cycles in that time," she said. "We are selling homes, albeit at a slower pace, and are working on the permits for communities that will open in 2010 and beyond."

Two of those future communities throughout the county include Meadowood in Fallbrook and Castlerock in eastern San Diego.

For several years, Fallbrook residents have voiced concerns about Meadowood, a proposed development northeast of Interstate 15 and Highway 76 that includes the construction of 867 homes. Last year, Pardee revised the plan to address the needs of both county planners and the Fallbrook Planning Group, and it has set aside approximately 190 acres for natural open areas, existing avocado and citrus groves, a community park, multiuse trails, "pocket parks" and an elementary school site.

"As a builder of master-planned communities, we take pride in offering a variety of housing options for homebuyers, as well as commercial and community infrastructure to enhance livability," Fischer said.

For now, the company must continue to endure a storm that has hit the largest segment of its division, and shift some energy toward projects that include corporate centers, business parks, shopping centers and upscale apartment homes throughout Southern California and parts of Nevada.

"As homebuilding is the largest segment of our division, the residential market has impacted us, as it has others in our industry," Fischer said. "We balance a bit of that impact with activities in our commercial and retail segments."

Fischer also noted Pardee weathers downturns much the same way other companies do.

"We cut back where we can and get back to the basics," she added. "We also continue focusing on master-planning for the future so that we are ready when the market picks up again."

When that will happen? Despite her background in economic forecasting, Fischer hesitated to offer an answer.

"I try to refrain from the hypothetical," she said.