In 2005, after being forced out of his original fabrication facility by a landlord in Tecate, Mexico, and after losing more than $80,000 worth of his equipment and supplies, Frank Tyler had to start his business, T2K Trailers Inc., from scratch.

To stay afloat, he and his family built trailers in their garage to fulfill their contracts until they outgrew the space required and moved into their current location in El Cajon. After three short years, T2K Trailers is looking to move into a larger facility (approximately 10,000 square feet with outside storage), with a five-year lease and option to buy.

T2K is a family-owned business. Tyler, as president, shares primary ownership with his wife, Debby, who is the CEO and head of the human resources department. Debby also works her primary job, where she does the medical billing for a doctor's office. Their son, Sean, is the vice president, chief design engineer and in charge of outside sales. Sean's wife, Jennifer, is in charge of the paint department and is the office manager. Their foster-son, Robert, used to work for them but is now trying to become a border patrol agent. 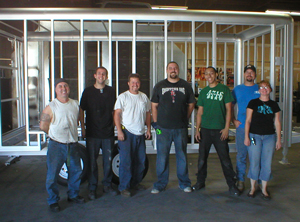 Prior to going into business, Tyler's field of expertise was in quality engineering and nondestructive testing. He was liaison to weld engineers and ran the x-ray laboratory for General Dynamics' Astronautics Division, which later was bought by Lockheed Martin.

Tyler has worked hard to build the business and also makes time to educate himself in as many aspects of business ownership as he can. He has taken a variety of workshops offered by SCORE Counselors to America's Small Business, on topics such as business computer skills, networking, understanding government contracts and more. He has also taken workshops offered by the San Diego County Water Authority's Small Contractor Outreach and Opportunities Program (SCOOP).

"What has been done by Frank, in rebuilding his business from scratch a second time, is extremely impressive. I anticipate he will be even more successful than before," said Ruben Garcia, San Diego SBA District Director.

T2K Trailers is a niche business, and as a result, the recession has not affected the company very much. It specializes in completely custom-built trailers. T2K manufactures trailers for virtually any purpose, including hauling boats, jet skis and heavy equipment. In addition to trailers, the company does metal fabrication, trailer retrofits and repairs, and offers a spray-on truck bed liner called Superliner that creates a durable, rustproof surface. The company also is testing a new product, has applied for a patent and is waiting for just the right time to introduce the new product line.

In addition to individual clients, T2K Trailers has contracts with and creates custom trailers for a variety of government agencies. The company started bidding on government contracts a year ago and has since made ammunition trailers for the Army, mobile repeater telecommunications trailers for the California Highway Patrol, a 30-foot gooseneck for Oregon Parks and a portable aircraft engine test stand trailer for San Diego Miramar College Aeronautics Department. It has numerous contracts in the works, with more to come. Tyler is looking forward to moving into the new larger facility so that the company can go after much larger contracts.

To all small business owners and entrepreneurs, Tyler passes along these words from Sir Winston Churchill: "Never give up ... never, ever give up." They have served him well.