Mark Watton, general manager of the Otay Water District, who helped initiate the historic 200,000-acre-foot Imperial Irrigation District transfer to San Diego near the end of the Clinton Administration, warns the region's water supply is in more peril than ever.

"We would have been cooked without that transfer," said Watton.

The transfer, he said, may never have happened if he and some of his associates hadn't cornered then-Secretary of the Interior Bruce Babbitt during a conference at Caesar's Palace at the end of the 1990s.

"It got things going. We'll get about 80,000 acre-feet from the transfer this year."

An acre-foot is deemed enough water for two families of four for a year. 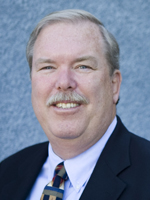 Watton, a former member of the board of directors of the Metropolitan Water District of Southern California and a past chair of the San Diego County Water Authority, says the drought and the endangered status of the delta smelt could spell economic disaster for the region.

"How are we supposed to make up the difference?" he asked.

Watton said even if the rains came in significant quantities, deliveries would still be restricted due to the smelt.

"That's because they are only allowed to run the pumps at certain times," Watton said.

On the positive side of San Diego County's supply equation, Watton said the decision by agricultural users to subject themselves to a 30 percent water cutback in exchange for cheaper water is making a difference. He said he has little sympathy for those farmers now complaining about the cutbacks.

"Maybe the public doesn't understand that this was a cutback they (the farmers) agreed to," Watton said.

As the Otay Water District's general manager, Watton must ensure water distribution in a 125-mile area that is the largest of any of the San Diego County Water Authority's member agencies.

The 52-year-old Otay Water District may be getting even bigger. The Sycuan Band of the Kumeyaay Nation has applied to have its reservation included within the Otay Water District to ensure a steady water supply less dependent on wells. It appears the district will sanction the request.

Watton manages a $98 million ($67.1 million operating) budget for the Otay Water District and oversees the needs of about 200,000 people in about 47,600 residences.

This year's $98 million budget represents a 2.7 percent decrease from the previous year and includes capital expenditures of $30.9 million.

All of the potable water delivered by Otay is purchased from the San Diego County Water Authority, which in turn, purchases it from the region's water importer, the Metropolitan Water District.

Otay also owns and operates a wastewater collection and reclamation system, providing public sewer service to approximately 5,000 homes and businesses within the Jamacha drainage basin. The district's Ralph W. Chapman Water Recycling Facility produces up to 1.3 million gallons (an acre-foot equals 325,851 gallons) of high-quality reclaimed water each day. Through a dedicated pipeline system, the reclaimed water is transported into the eastern Chula Vista area, where it is used to irrigate a golf course, elementary and high school playing fields, public parks, roadway landscapes and various other approved uses.

"Years ago we made the decision to go with dual plumbing in new construction. Developers screamed about it at first but now they are very happy we did it. We've got a tremendous investment in this," Watton said.

About 10 percent of the district's water is being recycled. The district delivered about 39,359 acre-feet of potable water deliveries to its customers last year. Another 4,568 acre-feet in recycled water was sold by the district in 2007.

Finding more groundwater supplies is also expected to be part of the district's water future.

"We put this on the back burner about 12 years ago and it looks a lot more viable now," Watton continued.

More efficient systems, future desalination and conservation methods including the promotion of drought-tolerant landscaping and artificial turf are helping to complete the water district's plan.

The Otay Water District, which has about 170 employees, has numerous capital projects under way to improve its services. These include a $22 million, 3-foot-wide, five-mile potable water pipeline that will extend from just east of Campo Road in the Spring Valley area to Lexington Avenue in El Cajon. The project is slated for completion in January 2010.

Other projects either recently completed include new small reservoirs, other new pipelines and a large amount of upgrades of infrastructure throughout the district.