By PADMA NAGAPPAN, Special to the Daily Transcript
Friday, September 12, 2008

The corporate world would do well to observe and learn from Jesus Gandara, the superintendent of the Sweetwater Union High School District, on how to get acceptance and involvement from stakeholders in creating fundamental change.

Gandara arrived at Sweetwater in 2006, fresh from a successful stint at Mercedes Independent School District in Texas, where he overhauled the system of a border town school district rated as the sixth poorest among 1,000 districts in the state.

He did this by initiating conversations with parents, students, teachers and administrators, listening to them and involving them in bringing about the change reflected in improved scores and the schools' academic rankings. He has followed the same strategy here, and it is proving to be successful.

Sweetwater trustees recently renewed his contract for three years, and Gandara has embarked on an ambitious agenda for the district. He held a welcome back meeting for district employees before the start of the school year, to look back at how far they have come and to look forward to achieving new milestones. 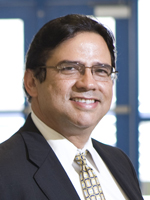 "I think the bottom line is student achievement. Every decision is driven by this," said Gandara, describing his vision.

"It has been shown that test scores have been raised by 10 percent just by improving the facilities, with the same students, teachers and programs. So we want to improve the aesthetics of every school, so the student is drawn by the appeal and feels safe," Gandara said.

When he first arrived, he felt that too much money was being spent on design and not enough on the actual construction.

"So we ended up releasing our program managers and we hired new managers to work for less than before -- they were charging a commission structure of 9 to 15 percent. I asked them to go to 8 percent," Gandara said.

He recounted how his staff said it would not work. Ultimately, two of the architect firms left, but the other three stayed on.

"Now we are getting more bang for our buck. The designs are very nice and teacher friendly. So children on the west side of the 805 are going to have just as nice schools as those on the east side of the 805," he said.

Proposition O, which has been proposed to get approval for a bond of $644 million, will play a part in making this vision a reality. It will help upgrade classrooms, remove asbestos and lead paint, upgrade fire and life safety systems and improve handicap accessibility.

Another goal is improving attendance. Even a marginal increase in attendance, Gandara explained, would have an important effect on both the student's performance as well as on the district's budget. The district has 43,000 K-12 students. Even if each student misses one or two fewer days, it would significantly increase attendance records and funding.

"This year we had a $6 million budget cut. With one more day of attendance, we will receive $1.5 million in revenue from the state. Two extra days will mean $3 million in revenues. So (with even a marginal increase) we could replace the budget cut by half," he said.

Gandara has initiated some innovative marketing strategies to increase attendance. One example is the "Re-Think School, Miss School, Miss Out" spray-painted messages and posters that appeared all over school campuses last year. The word was spread among students about the rewards for improving attendance.

Listening to staff paid off in alerting Gandara about priorities. One complaint was about the time it took the central office to respond to queries from school principals and others. He promptly flattened the organizational structure and ensured the new system would respond promptly.

Increasing the number of students who pursue a college education is another priority. Currently, nearly 45 percent of graduates do not go directly on to college, opting for careers in the trades.

"This is not a Sweetwater phenomenon; it's similar to the national average," said Gandara. "Many students drop out because they don't find a curriculum that is enticing, that they are interested in. So we need to make it more relevant."

His idea is not to push a student toward low-skilled trades, as was the practice in the past, but to motivate them to aim high with a more rigorous curriculum.

"You want to be a plumber, but we want you to be a master plumber. What if we brought in experts from the trades to help mentor you so you can start your own business some day?"

In his recent speech, he explained to the district employees that a redesign is a monumental task and that it can be very tough on superintendents. "Most of the superintendents I've seen who take this on are either run out of town or they retire."

While addressing the issues, Gandara has communicated the message that there is no set solution that he will force on any group; on the contrary, he expects everyone to chip in with ideas that will evolve and coalesce into an optimal solution.

"My philosophy is this -- it's not my show, because then I'd be dancing by myself. It's our show. So our strategic plan is to incorporate input from the people who are going to be impacted by these changes," he said.

At the outset, the district hired a consultant who put together a focus group of about 40 people to hash out the strategy. Then, it brought together 400 people representing all the stakeholder groups, to create an action plan that fleshed out the details of the main strategies, which Gandara called his "bible for success." The process took eight months, beginning in 2006, and is in its second year of implementation.

His biggest challenge has been to get people to support change based on the sense of urgency.

"Change is very difficult -- as one of my associates said, 'The only person who welcomes change is a baby with a wet diaper.' People welcome changes when it does not concern them."

Despite the anticipated changes, his plans have been received favorably. When he recently asked if the high school redesign was doable, the overwhelming response was positive.

"Systemic change of this magnitude is very hard to bring about; redesign is difficult and taxing. We're not just asking for two new trade schools. We are asking for fundamental change," he said.

Gandara’s strengths were: deception, incompetence, arrogance, corruption, and manipulation of certain board members and the media. Some say that he was very stupid, yet he left our district with almost ½ million dollars, and health benefits and a pension for life. My hope is that he will continue to be a burden to our taxpayers by being convicted and sent to prison. But I am tempted to bet that he will be allowed to plea bargain down to a fine, community service and maybe a weekend or two picking up trash alongside a road.