By PADMA NAGAPPAN, Special to the Daily Transcript
Friday, September 12, 2008

The Village Theater is the only movie theater in Coronado, built in the 1940s and located on Orange Avenue. It was closed down in 2000, leaving city residents with no option but to go across to downtown San Diego or elsewhere to catch the latest movies.

While Navy families have access to a theater on base, the public has no choice but to commute. Now the Village Theater could be operational as early as next summer, but definitely by the end of 2009.

The Community Development Agency of the city of Coronado approved an agreement on Aug. 5 to fund the renovation with a grant and to allow Five Star Theaters , an independent exhibitor, to operate the theater under an 18-year lease agreement with the owner, Robert Siegel.

The renovation is expected to take a maximum of 18 months, according to Rachel Hurst, the director of redevelopment and housing at the city of Coronado. Five Star will chip in with $325,000, and the entire project will cost between $2.5 million to $3 million, according to Lance Alspaugh, the lease operator and owner of Five Star. 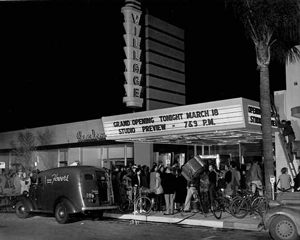 The Village Theater in Coronado opened in March 1947 and was shut down in 2000. Photo courtesy Five Star Theaters

Alspaugh acquired the Los Angeles-based company in 1993 and has grown it to 35 employees, which operates two theaters in Los Feliz and one in Whittier City, aside from the new project in Coronado.

"All of these locations have one thing in common, they are monopoly zones, with no other theater in the vicinity, so this gives us a competitive edge that others don't have -- you don't have to fight as hard to get movies as you would in areas with an AMC or Regal," Alspaugh said.

Most movies, he explained, run for one or two weeks "if you're lucky," before they end up on home video, so they burn out pretty quickly. "So you're done in a week or two and then you have to get another movie."

Five Star has experience with massive renovations, which the Village Theater will require, both on the exterior as well as the interior. Back in 1993, Alspaugh took over the lease for the Vista Theater in Los Feliz when it was in bad shape and turned it around successfully.

"We could have gotten rid of it by selling it quickly or we could renovate it. Unlike with the Village Theater, we did not have a city grant. I signed a loan to finance the project and as the money came in slowly, we caught a couple of lucky breaks and my team and I did it slowly over three years," Alspaugh said. 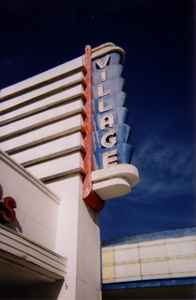 The theater will require extensive exterior and interior renovations, at a cost of $2.5 million to $3 million. Photo courtesy Five Star Theaters

The city of Los Angles paid for the earthquake retrofit and Five Star decided to reduce the seating by half, from 800 to 400, making the theater more spacious, adding new acoustics, restoring the Egyptian motif on the walls, putting in new air conditioning, new carpeting and a new box office.

Following the renovation, Warner Bros. gave him a chance to play first-run movies. Based on Warner Bros.' knowledge of the work Five Star had undertaken with the Vista, the company tipped off Alspaugh about the Village Theater in Coronado closing down, asking him to give it a shot.

"We had several conversations with the Siegels, we tried to negotiate the terms over four or five years. We couldn't come to terms, so the deal died. But I kept checking with Bob Siegel every six weeks, to see if anything had changed," Alspaugh said.

His persistence paid off, because in 2004 the city of Coronado became involved, showing an interest in reopening the theater. There was even talk of a city grant.

"The problem was funding -- the landlord is in his 80s and did not want to take on such a project, so he didn't want to finance it. And we were concerned about fully financing it ourselves, since the theater had been closed down completely and we didn't know how the audience would react," Alspaugh said. By contrast, the Vista theater, which he took the risk of financing, had been operational even though it was run down, so it had remained in the public's eye.

With the city grant, the major obstacle obstructing the deal was removed and Alspaugh was rewarded for his persistent commitment over the years with the lease agreement, set to expire in 2026.

According to Alspaugh, everything will have to be gutted and built up from the inside out.

"There's asbestos inside, the roof leaks, the seats are short, plumbing and electrical need to be replaced. The city requires that we restore the façade of the exterior as it used to be; it is the nicest part of the building. But the inside will be a blank canvas for a theater architect."

He expects to choose an architect over the next 30 days. But he has already chosen an experienced theater designer, Joseph Musil of Los Angeles, to provide the overall design direction. Musil is known in the theater business for the restoration of the El Capitan Theater for the Walt Disney Co. (NYSE: DIS), and he also operates a theater museum in Santa Ana.

"Musil will build a 3-D model, conceive the look and feel of the interior, and the architect will work in conjunction with him in making the vision a reality," Alspaugh said.

Since the theater was built in the '40s, Musil's focus will be to bring that era to life, sporting a combination of art deco and streamlined modern looks, according to Alspaugh.

He said the theater will house between one and three screens, which will depend on the cost. Plans call for one large auditorium with 225 seats and two VIP screening rooms with 50 seats each, in addition to state-of-the-art acoustics and ambience.

Alspaugh anticipates showing first-run movies, seven days a week, four shows a day. Initially, he intends to play a hands-on role, visiting Coronado often and then eventually relocating one of his key staff, an experienced house manager who will take charge of running the theater.

"A key goal of our downtown revitalization and redevelopment effort is to save and restore the Village Theater. Our citizens look forward to enjoying the neighborhood movie experience in Coronado once again," Coronado Mayor Tom Smisek said.