As San Diego County has grown, so has its need for treated water.

As of April, San Diego County is home to the world's largest submerged membrane water treatment plant. The Twin Oaks Valley Water Treatment Plant has the capacity to pump 100 million gallons of water to residents in North San Marcos to San Ysidro, and could serve all 3 million residents of San Diego County for two to six months in an emergency.

San Diego County now treats roughly more than 75 percent of the water it uses, a 50 percent increase since the plant's completion.

Though San Diego still has to rely on outside sources to pump untreated water in the area, the plant allows for more drinkable water to be brought into the region. San Diego used to rely heavily on the Robert A. Skinner Treatment Plant in Riverside, but pipelines from that facility could only pump limited amounts of treated water to San Diego. 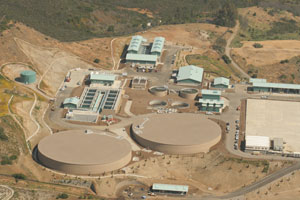 San Diego County is now home to the world's largest submerged membrane water treatment plant. The plant has the capacity to pump 100 million gallons of water to residents.

Because of this, before the plant's completion, the San Diego County Water Authority (SDCWA) periodically would give notice to the public that rationing might be necessary to keep the demand for treated water from outstripping the capacity for the Skinner plant.

"We had the plans (to ration water), but we never had to implement them," said Tim Suydam, the senior engineer and now manager of operations at the Twin Oaks Valley plant.

Two large wells on the site can hold 15 million gallons of treated water, or enough to serve all of San Diego County for about four or five hours at maximum flow. No new pipelines needed to be built to facilitate the plant since it was built adjacent to an aqueduct carrying water from the Colorado and Sacramento Rivers.

Three companies were asked to put forth "initial submittals" in February 2005, and CH2M HILL was eventually chosen to build the plant and run it for the next 15 years under the management of the SDCWA. The contract was executed in October 2005.

"They were required to design, construct and have the plant operational within 30 months of contract execution, and they pretty much did it," Suydam said.

The water treatment plant began pumping water to residents on April 7. Though there are 13 other treatment plants in San Diego, this was the first plant that the SDCWA planned and will maintain.

"We knew that the contractor was going to make this as efficient and as effective a treatment plant as possible because they were going to be responsible for operating it for the first 10 to 25 years of its operation," said SDCWA Media Relations Officer John Liarakos. "They had to make it work ... instead of building it, turning it over to us, then it's our problem."

Construction of the plant went smoothly, for the most part, according to Liarakos, and the facility was completed on schedule, in time for the peak water use season.

The project was met with minimal resistance from the community, according to Gina Molise, senior public affairs representative of SDCWA, though initially the neighbors surrounding the plant were concerned about having a large, potentially noisy facility in the middle of their quiet valley.

"I was there at one of the first meetings we had with community members and they did not like the idea of us building anything in their pretty little valley," said Liarakos. "And by the time we got done with this thing it was a 180-degree turn around."

Molise said a working group, developed in 2004 and long before the project broke ground, helped create a facility both the SDCWA and the members of the surrounding community were pleased with in the end.

"One of the keys to this project was that we got the community involved as early as we did," she said.

She added that community members created a list of 50 priorities about the plant, including noise level and how well the buildings would blend in with the surrounding environment.

Thirty-five of the 50 priorities were implemented into the construction of the building, Suydam said, including panels to decrease the noise of machinery, tinting the concrete that the buildings were made of and using drought-resistant landscaping to break up the monotony of large buildings.

"You drive up to the plant and you can't hear it at all," said Suydam. "You don't even know it's an operational facility."

The project was given a budget of $188 million, but was completed for $179 million.