Business aircraft development company Spectrum Aeronautical LLC is just getting off the ground. But with two big deals recently forged, it's growing quickly.

"We are currently working on two business jets and putting them through FAA certification," said Austin Blue, Spectrum's president. "We expect the first airplane to be certified towards the end of 2010."

Of note in the past two months are two different orders, one to Jetpool LLC, of Charlotte, N.C., and one to North American Jet. New business like that is encouraging -- especially in the current economy.

Spectrum manufactures aircraft for use in the personal, corporate flight and commercial-use (such as air-taxi) markets. The first of the two main models being produced is a mid-size, nine-place jet, the Freedom Model S-40. The second, the Independence Model S-33, is an eight-place light jet. Projected selling prices are $3.65 million (in 2006 dollars) for the Independence S-33 and $6.2 million for the S-40. During its development phase, Spectrum is accepting purchase deposits. 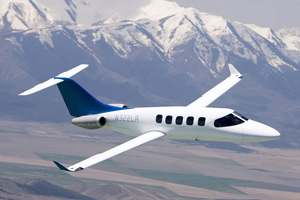 Spectrum's Independence is scheduled for certification and initial deliveries during 2009.

The company's primary competitive edge comes from its use of some of the most advanced technology in the industry today. Constructed from a proprietary material, trademarked as fibeX, the unique carbon fiber epoxy composites do not use aluminum. This leads to advantages in being both light and durable, achieving precise tolerances and, perhaps most importantly, fuel efficiency. The aircraft are able to burn 40 percent to 50 percent less fuel than comparably sized aluminum aircraft. Next-generation fanjet engines also help in reducing fuel consumption, as well as cutting back on greenhouse gas emissions.

"We're not the only one working on composites," Blue said. "But we're more advanced than many of the others out there. And, are lower priced for acquisition." 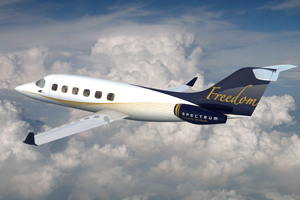 Spectrum's Freedom is scheduled for certification in 2010.

Another key distinction is in the focus on designing for not only sleek interior aesthetics and engineering, but also for optimum safety. Spectrum's technology has allowed for designs that create higher thrust to weight ratios, better situational awareness and lower pilot workloads. The mission: to make Spectrum aircraft the safest business aircraft in the world.

Spectrum is in the process of obtaining distributorship relationships internationally, from Europe to EMEA, and it expects the next few years to bring relatively substantial growth in the business jet market. This will likely be driven in large part by the anticipated replacement of turboprop aircraft with light jet alternatives.

The privately held company is funded by a group of investors and, in addition to its Carlsbad office, has a facility in Spanish Fork, Utah. The latter handles most of the technical development, including manufacturing.

"We've chosen to place the sales and business administration here in North County," said Blue. "A big part of the attraction of that was the wonderful facility at Palomar Airport, which really is one of the great airports and jetports in Southern California -- and in the West. It attracts a lot of the flyers that we're trying to get in front of with our products."