The mission of RMJ Technologies is to increase commercial vehicle safety and efficiency. And one key way the company wants to make that happen: Helping vehicle fleets improve their vision.

"You see a small camera on a Lexus -- but on a big truck there's a sign that says, 'If you can't see my mirrors, I can't see you.' This is ridiculous," said Jerome Toliver, the company's CEO and co-founder.

In addition to rear-view camera systems to alleviate blind spots, RMJ Technologies is the reseller of three primary fleet management solutions. The first, Universal Tracking Solutions, provides extremely detailed GPS tracking, which can work in conjunction with Garmin navigation units for turn-by-turn directions and route optimization. The second, Networkfleet, offers diagnostics solutions such as remote online access to not only vehicle location, but also to fuel efficiency trend data, which can result in the reduction of overall fleet operation expenses up to 25 percent. Vehicle Path, the third product, provides basic telematics (tracking and tracing) at a very low cost. 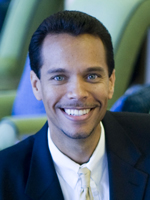 RMJ Marketing Inc. is the umbrella marketing organization, which leaves the company open to market, resell and supply what it sees fit. It doesn't handle any of the manufacturing functions, but has considered potentially putting its private label on one telematics product. Toliver also states that the company acts more as a consultant, letting potential clients know upfront that they are resellers.

"We don't want to sell everything. We want to be very good at the three products we're offering," he said.

A key drive to purchase for the navigation systems is fuel savings and reduction of carbon dioxide emissions. With a navigation device, Toliver noted, the number of miles driven can be reduced by 16 percent.

From a competitive standpoint, he believes those three products together satisfy the needs of all different types of customers.

"In remote diagnostics, there is really no one else. In navigation, there are a few options, but you have to go look. And Vehicle Path is at a price that I would say there's a 95 percent chance you're not going to find a basic telematic that's cheaper than that," Toliver said.

While the growth potential for telematics is great, Toliver reports the saturation figures on fleets that actually use telematics are extremely low, estimated to be around just 10 percent. And RMJ has managed to keep its margins the same, while the product prices drop.

The company is now working with the Metropolitan Water District of Southern California to provide Networkfleet solutions, and with the San Diego International Airport's transportation shuttle buses to offer rear-view fleet cameras. Toliver expects continued growth in the government sector.

While the economic downturn has cut back the number of small-fleet accounts, those with five to 10 vehicles, it has also increased notice of RMJ Technologies among larger corporations and municipalities. More and more fleet managers are beginning to see the opportunity to mitigate emissions and the potential reduction in fuel costs RMJ's products can offer, especially as fuel costs rise.

"A couple things have happened," Toliver said. "The economic downturn is obviously associated with fuel. That has actually helped us, because companies have been hammered in fuel costs all of a sudden. Now companies can get a report on their phone when a vehicle has been idling longer than, say, a five-minute threshold or traveling at 70 mph longer than the agreed-upon 10-second threshold. They are now using those things to reduce fuel costs."

An overall shift in perspective on these systems has taken place since the downturn as well. While many companies knew different tracking and tracing options were available, most didn't view them as a necessity.

"When we hadn't yet had the downturn, people felt it was a luxury," Toliver said. "Then as more time went by and they started getting navigation in their cars, managers began to see how they could implement the same thing within their fleets. The consumer almost had to drive the fleet manager.

"Then, once they were interested, things began happening at warp speed; when fuel prices escalated, it then became a necessity. And it all happened over the last year."

The bulk of RMJ Technologies' business lies largely in the San Diego region, but the company is looking at bids with companies in cities from Los Angeles to Atlanta. Its company headquarters are based in North County, but the company is run in primarily a remote capacity.

"We do a tremendous amount remotely," Toliver said. "All of the partners operate within the cities they live in. We do a ton by webinars, including live demos, and we outsource all of our accounting. We're kind of one of those modern, remote-type companies that carries very little overhead."

RMJ is looking to expand further on a national level across several private and government sectors. It is developing one marketing plan around the San Diego airport's use of RMJ's systems. The goal is to get airports around the country to follow suit in increasing both safety and efficiency. Toliver is passionate about this concept.

"There should be more and more focus on safety and on fleet-wide implementation. There are so many opportunities out there right now -- and if we don't land them, somebody should. Because they need to have these cameras on their vehicles, period."