From its global appearance on the Beijing Olympics stage, to new commercial lighting solutions, to helping homes achieve LEED certification, Vista-based Solatube International LLC is contributing to the evolution of lighting around the world.

The company offers alternative solutions for lighting interiors via a concept it pioneered, dubbed "daylighting." This daylight harvesting is really the strategic use of natural lighting techniques. It can be a cost-saver, and is also a large contributor to energy-efficient building design, something of increasing importance to consumers at the residential and commercial level.

In contrast to solar panels, Solatube units don't convert the power of the sun to electricity to in turn create light. Rather, they bring the sun directly into a building. This makes them a more cost-effective complement to solar panels, which can instead then be used for powering other building functions. Now they also can behave similarly to traditional lighting, offering sophisticated dimming and other features. 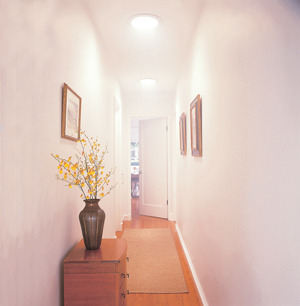 Solatube units are not skylights; they bring sunlight directly into a building through solar harnessing.

As more business owners and consumers realize the impact of high-energy consumption, Solatube's business continues to grow. The U.S. Department of Energy reports that electric lighting can account for as much as half of energy consumption in commercial buildings. Natural lighting is one solution to cut usage. In contrast to traditional florescent lighting, daylighting can also help in more qualitative ways, ranging from a reduction in employee absenteeism to healthier, more productive and purportedly happier workers.

Even in education, there is an increasing awareness of and demand for daylighting. It not only helps schools save energy, but can also help improve student test scores and increase attendance levels. And, when it comes to cost, Solatube reports that most schools spend more on energy than on books and supplies. Daylighting can help change that.

Solatube began its quest for alternative lighting in Australia in the 1980s and is noted as the leader in tubular skylighting. It opened its first U.S. outpost in Carlsbad, and the worldwide headquarters is now in Vista.

"I think there was certain level of confidence that San Diego was comparable to Sydney as far as seasons are concerned and geographically," said Robert Westfall, Solatube vice president of sales and marketing. "So it was good to mirror that operation here and sell our product locally year-round. Then it became home to several owners, and, as many people do, they fell in love with San Diego and wanted to stay here." 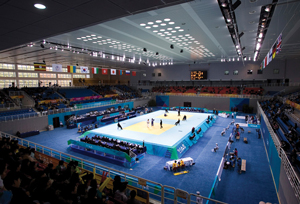 Solatube provided 148 daylighting systems to the gymnasium at the Beijing Science & Technology University for the 2008 Olympics.

The company went global with its solutions on a big scale by contributing to the mission of the Beijing Summer Olympics to be the first green games. Solatube supplied around 150 daylighting systems to the Beijing Science & Technology University Gymnasium, which housed the judo and taekwondo Olympic competitions.

A little closer to home, one of Solatube's newer products, the Tubular Daylighting Device (TDD) is being used to help buildings achieve various levels of LEED certification. It can do so via energy optimization and recycled content credits, among others. And while TDDs were originally developed for residential use, they now have evolved for use in institutional and commercial buildings as well.

In May, Solatube released the new Solatube 750 DS Daylighting System. Its Raybender 3000 Technology is able to keep lighting consistent, even during the darker winter months. The technology captures more low-angle sunlight during winter and collects early-morning and late-afternoon sunlight in spring and fall to maximize the light. Overall, this system increases the hours of consistent daylight available all year long. And, as demand for its products increases, Solatube will continue to evolve this and the other products in its repertoire of lighting solutions.

"The interesting thing about the world we're in, not only in North County but beyond, is that there's a worldwide movement toward efficiency and sustainability," said Westfall. "That has created a huge opportunity for us, even more than a few years ago. It's a really exciting time as the world focuses on sustainable design."

Company Description: The Solatube Daylighting System utilizes proprietary breakthrough technology, design and materials to capture the most daylight throughout the day to naturally illuminate any interior space.