As the executive director of the organization that claims to be the only one of its kind west of the Mississippi River, she is in charge of making sure the forum promotes high standards of professionalism in corporate governance, be it through training events, award receptions or conferences that foster better boards of directors.

"Corporate Directors Forum provides education and peer networking for people who want to be on boards, people who already are on boards and people who work closely with the boards," Sweeney said.

The Corporate Directors Forum (CDF), which serves San Diego County and part of Orange County, has an uncanny ability to attract national names. The speakers for Directors Forum 2009, the organization's annual conference, include Securities and Exchange Commission Chairman Christopher Cox, as well as Rex. D. Adams, chairman of Invesco Ltd. and Alleghany Corp. 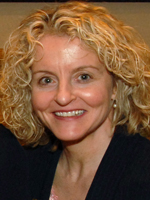 Despite having that list of good executives gone bad, Sweeney insists that most corporations and directors are inherently good -- especially with a little training.

The Corporate Directors Forum, a nonprofit organization, was established in 1991. Sweeney came on to the scene in 2000 -- before the Sarbanes-Oxley Act of 2002 and just before the Enron scandal broke.

"I have to say that not many people were familiar with the term corporate governance, myself included," Sweeney said.

Everything has changed with regulations that require board members to be an active part of the company. CDF steps in to provide training on everything from group dynamics to succession planning.

The need for training can stem from the fact that many blindly accept the offer.

"You can get out of school and not have a clue what a board of directors does," Sweeney said. "Unfortunately, a lot of them just learn on the job."

While that used to work before the Sarbanes-Oxley Act, being a director now is a job that takes a lot of time and commitment. People who join boards nonchalantly may suddenly find themselves dealing with a scandal when the chief executive officer does something illegal.

Sweeney has a background in small company operations management and freelance writing. She once owned a small business as well.

"Everything I've ever done in my life, I have used at this job," she said.

CDF is comprised of about 350 members who are motivated to establish an effective board, study corporate trends and stay up to date in tactics that keep their board successful.

"The people that aren't here are the ones we worry about," Sweeney said of the companies that aren't passionate about creating a functional board of directors.

One benefit from the training is that members can find someone who has been in similar situations -- be it a lawsuit or recall.

Sweeney used the example of a speaker who asked everyone in the room to raise their hand if they had been sued by Bill Lerach, an attorney from the previously named San Diego-based Lerach Coughlin Stoia Geller Rudman & Robbins who was convicted of suing companies as part of an illegal kickback scheme.

"It was amazing, all these hands went up -- at least a third of the people in the room had been sued by Bill Lerach," Sweeney said.

The peer network provides an instant panel of experts for companies trying to find solutions.

"Whatever the crisis is in that room, somebody has been through it," Sweeney said. "And I have found our group to be extremely generous, sharing what they know, helping each other out, so it really becomes a nice organization for meeting with your peers and interacting with your peers."