By SYDNIE MOORE, Special to the Daily Transcript
Thursday, October 30, 2008

With the current turmoil in the financial markets, the old adage "as good as gold" is taking on new significance.

"It's about being prepared," said Joel Perlin, president of La Jolla-based H.S. Perlin Co., which specializes in precious metals and rare coins. For nearly 40 years, Perlin has been developing personalized investment portfolios for high net worth investors, corporate pension plans and investors sensitive to privacy issues.

"Gold is the ultimate financial insurance against the unforeseen," he said. In today's erratic economic climate, it really is "the only form of wealth protection."

Owning gold however, is not for the faint of heart -- its value varies dramatically. Last March, for example, its price soared to $1,003 an ounce, then dropped to $747 in September, surged up to $905, then plummeted to $729 an ounce last week. 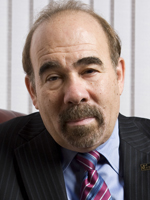 Despite its volatility, Perlin is bullish about the outlook for gold. "We believe that gold values are undervalued, and that it is not at an historic high in actual dollars."

While there has been a spike of activity in the last month, business at H.S. Perlin has been booming for several years. "Investors who want to protect themselves are financially savvy, and started buying with us before the crisis hit. People in the know have been foretelling this current debacle."

The trend is evidenced by the overall boon in this country in gold sales. To date this year, investors have purchased 611,000 newly minted U.S. one-ounce gold coins, nearly doubling last year's tally of 315,000 coins.

For Perlin, a professional numismatist who has coins in his coffer that date back to ancient Rome and Greece, the appeal of gold as an investment is hardly new. "Smart investors have known the value of gold for thousands of years," he said. "Nations, empires and corporations rise and fall, but gold offers permanent wealth."

Perlin, who describes himself as "in the tangible wealth preservation business," said his typical customer is a saver. "A person living hand to mouth on credit has no wealth to preserve," he said.

With the cataclysmic events of the last month, "people are asking, how safe are my paper investments? Obviously, the current fiscal situation is much worse than previously imagined," said Perlin, whose company has been helping customers invest in gold for nearly 50 years. There is no real insurance, he said, but gold offers security -- and a hedge against inflation and other unforeseen risks.

Acting as a broker or agent, Perlin represents the client, creating strategies for purchasing gold and other precious metals.

"We acquire the product for the clients, whether its gold, platinum or silver. What we do is quite different than dealing with paper assets -- we help people preserve, protect and profit against the devaluation of the dollar and other paper currencies," he said.

Perlin is the son of the company's late founder, Herbert S. Perlin, who was an expert in the fields of gold and rare coins, precious metals, as well as stamps and antiquities. "We're a family corporation," Perlin said. "My great grandfather lost his business due to the depression and failure of banks in America, so he started accumulating gold."

Gleaning valuable information from his father, Perlin eventually became a professional numismatist and gold trader after graduating from San Diego State University. Now a recognized expert in rare coins and precious metals -- and their appraisal -- he specializes in U.S. and ancient coins from around world and also has a track record in precious metal market timing.

He describes himself as "a hybrid," with an expertise in the history of gold and gold coins and also the understanding of how to utilize the coins to preserve wealth.

While gold comes in many forms -- from bars to coins to jewelry -- Perlin said he typically recommends coins, which are most readily exchangeable. Coins purchased strictly for their gold value, and not their numismatic value, are known as bullion coins, and many countries mint them. "Americans also hold gold bars as an investment, but jewelry is typically purchased for personal pleasure and enjoyment, not wealth protection," he explained.

While it's always a good time to buy gold, Perlin said, there are also good times to sell gold, based on lifetime needs. "Gold can be used like any financial tool; it just requires the decision to hold and maintain the asset."

Investors can visit H.S. Perlin by appointment only at its downtown La Jolla offices, where Perlin can show samples of rare coins from around the world, and platinum, silver or gold bars.

"There is something emotional about the warmth and substance of gold ... when you hold it, there is a sense you are holding wealth," Perlin said. "Besides that, it's beautiful." Universally, he said, people "love to adorn themselves with gold."