When John Sotoodeh talks about investments, he's talking about people as well as fiscal strategy.

"The minute we forget we're in a people business, we lose our competitive edge," said the Wells Fargo (NYSE: WFB) regional president, referring to both customers and employees.

"Never lose focus that this is a people business, and if you get that right, everything else happens."

Sitting in his La Jolla office one Wednesday morning, Sotoodeh exudes a calm confidence, as well as an enthusiasm for the bank that has been his career home for nearly 19 years.

As regional president, Sotoodeh oversees 163 branches and 2,700 employees, ranging from San Diego to the Inland Empire. 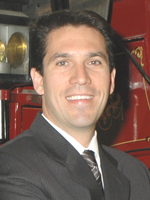 That number will continue to grow, he says, with 100 new team members and four new branches next year. Eight branches opened in 2008.

"We're still making investments and growing our distribution," Sotoodeh said. "It's an incredible market, even given the challenges that we're seeing."

Sotoodeh sounds optimistic about Southern California's contribution to the Wells Fargo portfolio. He acknowledged the region was among the first to feel the fallout from a faltering real estate market, but said that quarter-over-quarter losses are stabilizing.

"When it turns around, it's going to roar back stronger than other parts of the country," he said, pointing to San Diego's residential and small business appeal as well as its diversified industries.

Although he declined to provide specifics, Sotoodeh said regional revenue has continued to rise, and also noted significant increases in both deposits and loans.

Recent headlines have more or less favored the San Francisco bank as a whole, whose pending purchase of Wachovia Corp. (NYSE: WB) propels it to the high ranks of U.S. banking. Wachovia has between 20 and 25 locations in Southern California, most of which complement Wells Fargo's existing stores, Sotoodeh said, adding he would know more details in the months to come.

"When we combine the two together, it's going to make us one of the leaders here (in Southern California), if not the leader," he said.

One of Sotoodeh's top priorities since he became regional president in 2006 has been business banking. Under his guidance, the number of store-based business bankers has increased by 400 percent over the past two years.

He also sought to install additional management and special training classes to better equip his bankers to serve business customers.

Sotoodeh, however, is quick to credit the efforts of his team.

He highlights the importance of leveraging talent and expertise, as well as celebrating hard work with some fun.

"This is a really important aspect of a high-performing team," Sotoodeh said. "We have trips, recognition events and many other opportunities to recognize great things happening."

Randhawa said Sotoodeh is a skilled, positive and consistent leader who is "very caring for the team members, very willing to listen (and) always available."

Every week, in addition to talking and meeting with regional management, one of Sotoodeh's "non-negotiables" is to make personal visits to his branches.

When financial turmoil made headlines, Sotoodeh sent out regular e-mails to Wells Fargo team members, encouraging them to stay positive and concentrate on what they could control rather than what was out of their hands.

"What I consider most important as my role as a leader is being able to connect with our team members," Sotoodeh said.

He also has focused on helping other Wells Fargo employees move up in the company, just as he did.

Sotoodeh began as a part-time teller, working what he thought was a temporary job while he studied engineering at San Jose State University. He eventually decided to stay.

"We don't sell products," Sotoodeh said. "We help people buy their first home, save for their kids' college education (and) retire. We help people live out their dreams.

"There's so much personal satisfaction in helping someone that way, and I just absolutely loved it."

Sotoodeh continued his climb, eventually becoming a market president and then the Bay Area's regional president before moving down to San Diego.

Today, 75 percent of his promotions are made from within the company, and Sotoodeh said he takes joy in helping others accomplish their career goals.

Sotoodeh's dedication has paid off. According to both Sotoodeh and Randhawa, Southern California boasts the lowest turnover rate in the entire company.

As for the future, Sotoodeh holds to his positive outlook, intending for his team's banking strategy to "stay the course."

"We're going to look back a few years from now and see this as one of those times in the history of our company that was transformational, and we get to be part of it," he said. "We're going to come out of this stronger than we have ever been."