As a role model to female bankers, Gail Jensen-Bigknife is one of only a handful of female chief credit officers in the region. Six years ago, she helped found Security Business Bank, where she now serves as chief credit officer and executive vice president. She has decades of experience in banking, including service with California First Bank (now Union Bank of California), San Diego National Bank, which she also co-founded, Peninsula Bank of San Diego and U.S. Bank.

"For a woman to break the glass ceiling in banking, I would recommend that she get involved in lending," said Jensen-Bigknife. "Loans produce the greatest profits. So the most direct route to the executive circle may be through the loan side of a bank."

Interested in mentoring other female professionals within Security Business Bank, she helped develop the bank's "Executive at Every Level" program, which empowers every employee to be an independent thinker and problem solver. 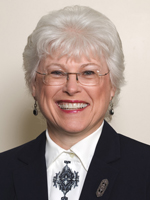 "There are sizeable opportunities for women in banking today, in both compliance jobs as well as in lending positions. And there is certainly opportunity for women to reach the executive level."

Jensen-Bigknife prides herself and her coworkers on providing excellent customer service to Security Business Bank's small and midsized banking clients. "Personalized service is what distinguishes our operation," explained Jensen-Bigknife, who calls customers regularly to offer ideas that may help their businesses run better.

She learned the importance of exceeding customer expectations from a young age. "From restaurant to lab to chicken hatchery, I had a 'kitchen sink' of early job experiences," she said. "But the common thread throughout my career has been figuring out how to meet and exceed customer needs."

Be open to opportunity

Jensen-Bigknife advises women in banking to listen, ask questions and accept challenges. She began her banking career thanks to a chance meeting.

"My husband and I visited California First Bank many years ago to apply for a car loan. The branch manager and I developed an immediate rapport, and he told me that he thought I'd make a terrific banker," she said. "At the time I was research editor for Psychology Today magazine and had never even thought about a career in banking. Years later, when Psychology Today relocated its offices, I called that banker to express interest in a job. He hired me as a branch secretary. In that role, I was exposed to all facets of a banking operation from opening new accounts to preparing loan documents. So leaving your options open is critical."

Finding a mentor is also essential according to Jensen-Bigknife, who encourages female bankers to identify someone in the industry who they respect.

"Earlier in my career, I suffered a major disappointment when a position that had been promised to me fell through. My mentor helped me to take a long-term view and consider my broader career trajectory. By being a team player, I was given an even better opportunity some time later and my career took off after that."

Jensen-Bigknife counsels young bankers to build the best reputation possible. "Maintain your integrity at all times. That will allow you the luxury of picking and choosing your opportunities."

"I came to Security Business Bank largely through reputation. I was introduced to Paul Rodeno, head of Security Business Bank, through a mutual friend. Paul and I shared similar values, a strong work ethic, a focus on community service and a desire to succeed. We're all proud of the bank we've created."