In mid-August, the employees of NuVasive (Nasdaq: NUVA) finished up moving into another new office site. The company was previously in La Jolla and Miramar, and most recently moved to a two-building site overlooking Sorrento Valley, with plans for a third building in the works.

That's a consequence of working for one of the fastest growing companies in the region -- you don't stay put for long.

However, staying put has really never been a goal for NuVasive. The company makes devices designed to improve spinal surgery, allowing patients to have a faster surgery and recovery time. Its mascot is a cheetah; signifying how fast NuVasive aims to get its products to surgeons in hospitals all over the country and beyond. This business strategy of speed and innovation is what Chairman and Chief Executive Officer Alex Lukianov says is the reason for the company's success.

"I think that our growth has largely been fueled by our very innovative platform," Lukianov said. "We've been booming."

NuVasive has grown about 50 percent for the past three years and experienced 17 straight quarters of meeting or exceeding numbers since going public.

Started in the late 1990s by local surgeon Dr. Jim Marino, who is no longer with the company, NuVasive's technology takes a novel approach to spinal surgery. The company's technology platform allows surgeons to access the patient's spine through the patient's side, avoid critical nerves with the NueroVision computer system and stabilize the spine with specialized implants. 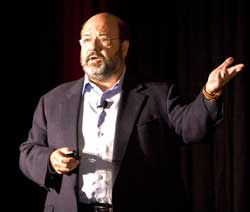 The surgery is designed to help patients with damage to the discs in their back and the cartilage that holds the vertebrae together. NuVasive has largely focused on surgery systems to help patients with lower back damage, but has recently moved up to higher regions on the back. The company also is developing tools for surgery on the neck.

Moving forward with new products is a large part of the culture at the company, according to Lukianov.

"We have a clear philosophy here of obsoleting our own products," he said. "We now have about 40 products that we've launched since inception."

Lukianov, a New York native, came to NuVasive in 1999 from Medtronic (NYSE: MDT), which is one of NuVasive's competitors. He said he thinks the constant ambition to update NuVasive's products, as well as its rapid customer service response, has given the company an advantage over some of its larger competitors.

Word-of-mouth has been helpful, he said, as surgeons tell one another just how easy the approach is to use -- but he also gives a lot of credit to the company's sales force. NuVasive's salesmen are exclusive to the company, though they live all over the country, pitching the idea to surgeons nationwide.

"That allows us to get in front of surgeons and hospitals and really talk about what differentiates us," Lukianov said.

In recent years, the company has expanded beyond the United States; opened offices in London and Munich; and also is working on moving deeper into European, Asian and Australian markets.

NuVasive has a distribution center in Memphis, Tenn., located near the FedEx headquarters so it can ship surgery systems as quickly as possible.

"Surgeons want things yesterday," Lukianov said. "If you look at the bigger companies, they're behemoths. They tend not to react as quickly as we do."

NuVasive listens to surgeons constantly. The company's campus has a cadaver lab where it trains hundreds of surgeons a year, and also has an onsite repair shop, where technicians can fix or adjust equipment upon request.

One point NuVasive's sales force likes to drive home is how the company's products can save hospitals' time and money. The surgery itself takes 50 percent less time than traditional back surgery, and patients are often walking the same day of the procedure, rather than the traditional four or five days.

This is something Lukianov knows from experience. In March, he became not just the company's chairman and CEO, but also a client when he had disk surgery using NuVasive techniques and products.

"As passionate as I've been about the company and our technology, I've undersold it," Lukianov said.

He had suffered from back pain for years and had gotten approximately 25 injections to curb his discomfort. He was so busy establishing a company to help others with the same problem that he didn't have time to get his own procedure. By last winter, the pain in his back and legs was so severe he could barely stand for more than 10 minutes.

"It was exactly what I've been telling people," Lukianov said of the surgery. "For years, there was no walk on the beach, it wasn't even a possibility. Dad was always excluded from that stuff, and I've got four kids ... I used to play a lot of tennis; I got rid of all my tennis rackets. Now I'm hitting tennis balls again. I did a four-mile hike in Hawaii with my family."

Lukianov once wanted to be a surgeon himself. He served in the Navy as a hospital corpsman at the U.S. Naval Academy under the command of the captain in charge of orthopedic research for the Navy. Lukianov "got the bug for orthopedics" and went to college as a pre-med, but ultimately decided it wasn't for him.

"I did OK with organic chemistry. When I got to physiology I was like, 'This is too much,'" Lukianov recalled with a laugh.

He went into clinical research instead, and worked for several life science companies, including Smith&Nephew and ultimately Medtronic.

When asked what it was about orthopedics and spinal surgery that appeals to him, Lukianov said they reminded him of carpentry, where you can actually build something or put it back together.

"Unlike other areas, (orthopedics) is so reconstructive that you can see the impact immediately of what you're doing," he said. "Just the impact it makes on people's lives."