Long known for its genetic analysis business, San Diego-based Sequenom is hoping to soon cash in on a second endeavor.

The company has been expanding into the arena of molecular diagnostics, working to make noninvasive tests for pregnant women to detect possible disorders in their unborn babies, allowing doctors to begin prenatal treatments when available.

"The market potential is well over a billion dollars in the U.S.," Sequenom's Chief Executive Officer Harry Stylli, Ph.D., said of the molecular diagnostics business.

Sequenom (Nasdaq: SQNM), which started in Hamburg, Germany, in the mid-1990s, is largely known for its genetic analysis. The company sells technology to research institutions, particularly in the area of cancer. It also sells to the agriculture and livestock industries, and large pharmaceutical companies. 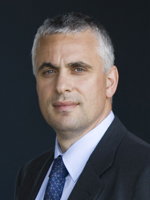 "The genetic analysis business is already worldwide and provides most of our revenue," Stylli said.

A native of England who's worked in the San Diego life science sector since the mid-'90s, Stylli came to work at Sequenom in 2005, and helped get the company's second venture, the molecular diagnostics business, off the ground.

Sequenom has focused its molecular diagnostics business on prenatal tests for pregnant women. Right now, many of these tests are invasive, involving needles to draw fluids from the woman's womb. This can be dangerous for both the expecting mother and the fetus.

Sequenom is trying to create noninvasive tests. The company's main technology for this work is called SEQureDx, which is based on the work of Dr. Dennis Lo, a professor at The Chinese University of Hong Kong, and isolates and analyzes circulating fetal nucleic acid from a maternal blood sample.

Through partnerships with genetic testing laboratories, the first test using SEQureDx technology, for the disorder fetal RhD, became available in 2007. Fetal RhD is a condition in which a human becomes immune against its own cells, and can cause death by heart failure in a fetus.

Sequenom is also trying to find tests for Down syndrome, congenital adrenal hyperplasia and hemophilia. In the case of hemophilia, if it can be detected earlier enough, a pregnant woman can take treatments that will reverse the disease in her baby.

In order to expand its molecular diagnostics business, Sequenom bought a laboratory in western Michigan, and much of that wing of the business will be housed there, though the company's headquarters will remain in San Diego.

Sequenom's San Diego office employs about 150 people, Stylli said, and about 230 worldwide. The company has offices from Hamburg to Boston to Tokyo.

On the day Stylli was interviewed, the Dow Jones Industrial Average had sunk as low as 800 points before recovering to end the day about 350 points down. He said the news was as troubling for his company as it is for everyone else; but he still felt confident that Sequenom can continue its growth.

"Business is growing, even in this horrible environment," he said. "I don't know how, but it is."

He said the fact that the company had sealed up a large capital drive in July was a major help.

Some of that growth is in cancer research, an area the company has been focused on for some time. Stylli said he hopes the company can develop molecular diagnostics for cancer, figuring out the genetic profile for certain kinds of cancer so doctors can proceed with the most effective and cost efficient treatment for that particular patient.

"We're a relatively small company, but we have a big footprint," Stylli said.