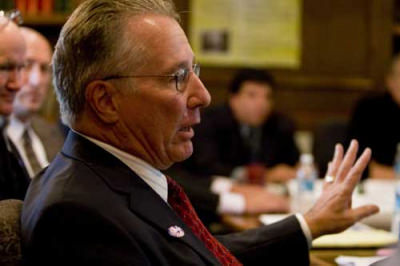 While some in the construction industry are turning an eye to public projects, others are opting to hunker down and hold out for the return of the residential market, experts said Nov. 4 during a roundtable discussion sponsored by Cass Sowatsky Chapman & Associates at The Daily Transcript's offices.

Frozen credit markets have brought residential construction to a standstill. The market will return, but much changed from past decades, predicted Borre Winckel, chief executive officer of the Building Industry Association.

"This is going to be a residential market back to basics," Winckel said. "It's going to be a denser, smaller product; it's the market we forgot to cater to."

Bill Anderson, director of planning for the city of San Diego, agreed the market will return with a demand for smaller city-dwelling units. The city's recently adopted general plan encourages growth in urban areas close to public transportation. The era of upscale suburban sprawl into undeveloped land is past.

"This was the first time in the city's 230-year history where growth in the future from here on out is not growing into green-field land development," Anderson said. "So in the future it's going to be urban infill development, redevelopment, converting industrial land into housing, those kinds of things."

Perhaps gearing up for the return of the economy, there has been an increase in sales of distressed multifamily projects, said Kirk McKinley, president of architecture and engineering firm McKinley and Associates. Such projects are being bought up at bargain prices.

Some in the industry are turning an eye to public projects to help ride out the recession. However, many are learning the sector is difficult to break into. Architecture and planning firm Cass Sowatsky Chapman & Associates has had a long track record of working on public projects, but got involved by linking up with another contractor.

"You have to have had that experience, or link up with someone who is a player," said founding Principal Edward Cass.

Smaller contractors are also finding it difficult to qualify to bid on large publicly funded projects. After selling his company, which became the sixth largest educational builder in the country, Doug Barnhart, national president of Associated General Contractors of America, could not qualify his new company to bid on a $3 million project for San Diego Unified School District, he said.

While some contractors are changing the types of projects they bid on, others are leaving the region or declaring bankruptcy. McKinley and Associates has been seeking work in other states and abroad even though the company has always worked primarily in San Diego. Many of the company's contracts have gone to places like China and Dubai, where the effects of the construction crunch are just now beginning to take hold, McKinley said.

The abundance of issues facing construction has garnered public attention recently, but the industry has found itself unable to speak with one voice, the experts agreed. Part of the problem is that while construction is thought of as a single industry, contractors working on commercial, residential and public projects face different issues and have different priorities. Thus, lawmakers hear varying stances from industry groups.

Two groups often in contention are the union and non-union trade contractors. The public almost never hears the two in accord, and a dwindling market has further exacerbated differences.

As an observer, George Hawkins, president of Associated Builders and Contractors, said it is nearly impossible to build consensus among construction industry professionals, union or nonunion.

"One of the reasons we don't pull together as an industry is because you guys are such independent cusses," Hawkins said.

There is a lack of collaboration and often disputes over which work on the same project should go to which contractor. For example, an electrical contractor and a carpenter may both be qualified to hammer nails into a window, Hawkins said.

"The industry is full of guys who say 'I know how to do it and I'm gonna go do it,'" Hawkins said.