Earlier this year Gene Brokaw, owner of Premier Pipeline Construction and president of the Engineering and General Contractor's Association (EGCA), traded in his Harley Davidson for a golf cart. At age 71, he's edging ever so slowly toward retirement, winding down a 45-year career in San Diego construction and wrapping up the last of Premier's business.

"The thing with owning your own business is when you want to retire you don't just pick a date and walk away," Brokaw said. "The unemployment reports still come in, highway patrol reports -- the paperwork still is coming in."

Brokaw engendered a family atmosphere at Premier that inspired dedication and loyalty in return: The handful of employees left will stay until all company business is finished. At its peak, Premier employed 130, one of whom was Brokaw's son, Andrew Nelsen, an estimator. Brokaw started the Murrieta-based business in 2005 knowing he'd work another few years, then retire.

A self-described workaholic, Brokaw studied electrical engineering at San Diego State University after leaving the Marine Corps, but quickly learned he wasn't an inside guy. 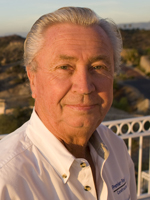 "I need to be in the sunshine and fresh air, so I went into the construction business and have been there ever since," he said. He started in 1963 as a union carpenter building bridges for Daley Corp. Over the next 17 years he worked his way up through the ranks as foreman, superintendent, estimator and project manager. Moving to Carver Corp.'s bridge division, he worked on projects such as the Coronado Bridge, Jack Murphy Stadium and the arched Eastgate Mall over I-805 Bridge before going into underground water utilities and eventually into business for himself in the late '80s. He closed that business in 1993 and consulted on emergency bridge repairs in Los Angeles after the 1994 Northridge earthquake. He was named vice president of operations at TC Construction Co. in 1996 and held that position for eight years. In 2005, he started Premier Pipeline, which specializes in joint trench utilities, primarily installing water, sewer and utility systems in private subdivisions throughout Riverside and San Diego counties.

Throughout the past 45 years, Brokaw has experienced the good and bad times in San Diego construction, but believes this is the worst.

"In the '70s there were some, but they were short. People got through them. Same thing in the '80s. But this time, work has just stopped," Brokaw said. "I saw it slow down November of 2006, and I'm cynical, but I thought it would pick up in spring or summer 2007."

When it didn't, Brokaw was forced to drastically reduce his workforce to 10, and predicted he'd be out of business soon if things didn't improve.

"I'd have liked to work for another year or so. I feel healthy enough," said Brokaw, who cited three factors in his decision to retire early: his age, the economy and the new California Air Resources Board (CARB) regulation that requires California contractors meet annual targets for retrofitting or replacing diesel engines in an effort to reduce emissions.

Brokaw is approaching the end of his two-year term as president of the EGCA, a nonprofit trade association that represents San Diego County general engineering contractors specializing in underground utilities, paving and concrete work.

He's been involved with the 200-member organization since 1984, and began serving on the board in 1996. EGCA Executive Director Debbie Day, who has known Brokaw for 16 years, said he has been particularly helpful with advocacy by representing the voice of EGCA contractors and their issues at agency meetings.

"The biggest things that helped me through these years is the EGCA and my involvement with the people there," Brokaw said. "We contractors are competitors, but we're also friends."

Day and Brokaw agree that the greatest challenge facing EGCA members is one of survival. Current CARB off-road diesel regulation combined with upcoming on-road regulation and the sharp downturn in the economy have created a challenging time for the construction industry. Brokaw called it a "perfect storm" that will put many contractors out of business. "Small companies can't afford to comply with the regulations: the economics of buying newer equipment or retrofitting the old equipment or employing new personnel to track the paperwork they're requiring," he said. "The larger, older companies will probably be all right -- they have the capital and personnel for what CARB will require."

To help the industry cope with the CARB regulations, the EGCA is offering a series of workshops to provide its members, and the industry at large, with the knowledge of how to accurately comply. That knowledge, according to Day, could make the difference between staying in business or facing stiff fines and sudden disqualification from construction projects.

"People are going to have to reduce overhead, be smarter in doing their jobs, and deal with the CARB regulations -- not bury their heads in the sand," said Brokaw.

When his term as EGCA president ends this year, he'll serve as past president for two years. He intends to be active in the same areas and the CARB regulations in particular, which he said he'd have more time for.

He plans to keep his business cell phone active, but said most mornings he'll probably be on a golf course or tending the garden at his Rimrock-area home. And afternoon callers may well find him playing bridge instead of building one.