"You can take the boy out of Indiana, but you can't take Indiana out of the boy -- and that's a good thing," said Edward J. Cass, AIA, founding principal of Cass | Sowatsky | Chapman + Associates, a San Diego architectural and engineering design firm founded in 1983.

"It's that strong Midwestern work ethic that formed the foundation of this company and which has helped us grow over the past 25 years from a one-man show to a major player nationwide in the military design-build arena," said Cass, who holds master's degrees in architecture and business administration from Ball State University in Muncie, Ind.

Spending summers in the Midwest as a construction worker for an Indiana general contractor gave Cass an understanding and respect for hard work. He applied this effort to the field of architectural design when he moved to San Diego, first as a junior architect for Hope Consultants and then as sole proprietor of his own company, Edward J. Cass & Associates. Along the way, Cass added two more Midwestern architectural principals to the team, architects Mark S. Sowatsky, AIA, and Wyatt D. Chapman, AIA, and changed the company name to Cass | Sowatsky | Chapman + Associates. 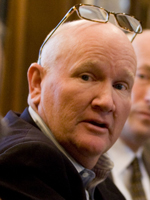 Because a company's greatest asset is its reputation, Cass said he made a commitment from day one to always provide the highest quality services to his clients.

"Our current workload includes a hangar project at NAS, El Centro, for the Blue Angels; several Marine Corps Barracks/Dining Facility projects at Camp Pendleton and at Camp Lejeune; a Wounded Warriors barracks project at Camp Pendleton; a Child Development Center at NASNI in Coronado; and a Multi-Battalion Operations Center Complex out at Twentynine Palms. You name it, we've probably designed that facility," he said.

Principal Architect Sowatsky said it has been a challenge to keep up with the military's constantly changing requirements, noting that the biggest changes he's seen have been in the design of barracks for single soldiers. Looking Spartan 20 years ago, they now are designed to have the same appeal for young people as college dormitories.

In 2009 the company plans to maintain a strong presence in the federal design-build arena while expanding into projects for public agencies as well as in the private sector, said CSC+A President Chapman. Other plans include a bigger commitment to the Building Information Modeling process by investing in more BIM training and technology over the next year.

"The potential for using BIM to streamline the entire the design-build delivery method is very exciting," Chapman said. "This technology enables us to work even more closely with builders to integrate critical construction information into the project at the beginning of design, such as construction material, costs, methods and systems."

The third area of focus for CSC+A in 2009 will be sustainable design. The company's goal is to have a staff of designers dedicated to ensuring that each project has an official LEED certification from the U.S. Green Building Council, not just a self-certification.

And finally, Chapman said the company intends to continue its strong, steady growth over the next year, which means the firm will most likely increase its staff. According to Chapman, one doesn't necessarily have to be from the Midwest to be a part of the CSC+A team, but a strong work ethic is required.