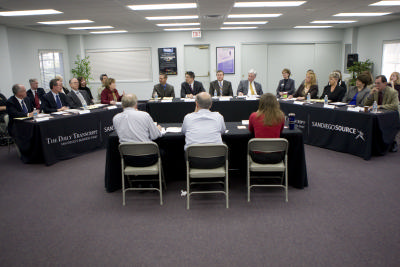 The financial markets are not only taking their toll on workers and those who might have to let them go; health care providers are getting slammed as well.

The state of the health care industry was the topic of a recent roundtable discussion at The Daily Transcript offices and hosted by Waste Management Healthcare Solutions.

Michael Bardin, a Scripps Health spokesman, said he has put the brakes on the bulk of his health care system's capital projects until the markets improve.

"This affects every campus that Scripps operates," Bardin said. "It's not that we have given up on these projects, but they have been slowed down."

One project that could be impacted is a proposed $203 million renovation and expansion at Scripps Mercy Hospital in Hillcrest. The upgrades would double the size of the emergency room, and the intensive care unit would be enlarged as well.

Bardin said plans are still moving ahead for the Scripps Cardiovascular Institute that would be constructed on the campus of the Scripps Memorial Hospital in La Jolla. The project, which gained a $30 million Howard Charitable Foundation Grant two years ago, isn't cheap. A 2007 report pegged the cost at $430 million for a facility that would include 168 inpatient beds among other functions.

Dr. David Tam, Pomerado Hospital chief administrative officer, said his Palomar Pomerado Health System is already faced with cost overruns at its more than $800 million, 333-bed Palomar Hospital being constructed along Citricado Parkway in Escondido. Now with capital markets the way they are, Tam has had to determine what the hospital could do without.

"Do we change the healing gardens? We have to look at what we can do to cut costs," he said.

Healing gardens may be important for speedier recoveries, but hospitals have a much more fundamental need -- survival. The California Hospital Association reports a 73 percent increase in unreimbursed costs in the state in the past year. That may mean tens of millions of dollars or even hundreds of millions of dollars the health care providers must "eat" and still manage to keep the doors open.

Most of the unreimbursed expenses are not a result of the completely uninsured, but due to inadequate reimbursements by Medicare and Medi-Cal.

"We got no money from the state at all last year," Marselian said. "We have 98 sites in the county and patients either don't have insurance or can't even pay the sliding scale they have to pay."

La Maestra has been able to garner enough funds to build a 32,000-square-foot LEED (Leadership in Energy and Environmental Design) Gold building being constructed near its Fairmont Street headquarters in City Heights.

Marselian said patients often wait so long for what would have been routine care that they end up flooding emergency rooms when the situation becomes dire. That, she said, makes everyone's health care more expensive, and could be deadly.

"Many people are going without preventative care," Marselian said.

Marselian said in some cases hospitals become so full that they go on bypass, and ambulances must go to another facility. She recalled that happening at the Sharp Hospital in Chula Vista.

"What if someone in Alpine has a heart attack and Grossmont Hospital is on bypass?" she asked.

Another issue is that charges can vary widely for seemingly comparable procedures completed within a year of each other.

"If you're talking about the cost of health care, what is that?" said Julie Adamik, Employee Benefits Training and Solutions president and CEO. "It's so ambiguous and confusing."

Adamik cited the case of a routine colonoscopy done in the same hospital and another done a year later. The cost had more than doubled from close to $2,000 to more than $4,000.

She added that higher co-payments and deductibles have been another part of the scenario and, again, people often can't pay.

Steven Finden, a Barney & Barney insurance broker, said while the managed care system has worked reasonably well for decades, as health insurance costs shift from the employer to the employee, many people are finding they may be able to insure themselves but not their dependents.

"A lot can't afford dependent contributions," Finden said. This is especially true when a job is lost, he said.

Hospitals in California have another problem. By 2013, their facilities must be seismically sound. While many health care systems are simply building new facilities, others must retrofit. Either way, with capital markets in flux, this could quickly become an unfunded mandate.

Gary Rossio of the VA San Diego Healthcare System said that up until recently, construction costs led to the cost of seismic retrofits increasing at the rate of 1.5 percent per month.

Steel and concrete costs have actually settled somewhat in recent months, but labor costs are still where they were or higher.

With the economy the way it is, Tam said this might be the time to renegotiate some upcoming construction contracts.

"Do we need to rebid the work? That's a question we have to ask," Tam said.