By JILL ESTERBROOKS, Special to the Daily Transcript
Friday, January 30, 2009

When La Maestra Community Health Services CEO Zara Marselian found out that patients at her clinics were having trouble putting food on the family table, she opened a Food Pantry.

When it came to her attention that folks were in dire need of dental work, she found a way to provide dentistry services, too.

And when demand for medical and social services kept increasing by double-digits year after year, she launched a $10 million capital campaign to consolidate a labyrinth of 14 patchwork buildings in the City Heights neighborhood of San Diego into one centralized location. 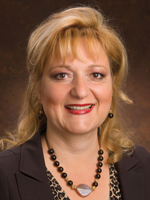 "It's just the way we grow, meeting the needs of our families," said Marselian of the San Diego-based organization that provides primary, pediatric and dental care, mental health counseling, and job training and placement services to underserved, ethnically diverse individuals and families throughout the county.

She sees the organization as a "change agent."

"They are the ones making the change; we just help facilitate that change and empower them by teaching them how to ask questions and where to seek assistance," she said.

Other changes are in the works. With the recently announced $1 million donation from Kaiser Family Foundation and underwriting of an $18.5 million bond initiative made possible by Anthem Blue Cross, construction can now get underway for La Maestra's new 34,660-square-foot "green" health care center that Marselian said "will improve care delivery, expand capacity to serve more clients and have a positive impact on the area environmentally and economically."

The new LEED-designed building project will enable La Maestra to retain its position as the largest employer in the central San Diego neighborhood with its 145 professional and support staff members who speak 19 languages.

And the new facility couldn't come at a better time.

With the county's unemployment rate reaching 7.4 percent, La Maestra's City Heights clinic, as well as those in El Cajon, National City and Lemon Grove, have been increasingly crowed with needy residents -- both unemployed and the working poor, who don't have insurance through an employer yet earn incomes greater than the government limits for assistance.

"We've been fielding a record number of requests for assistance during these uncertain economic times from people who are already financially stressed," said Marselian. Her clinics primarily serve the low-income and medically underserved, mostly either Latino immigrants or refugees from South East Asia and Africa without health insurance.

"With no county hospital, our clinics serve as the safety net for the community," she said.

The jump in jobless rates is just one of the many challenges she's faced in recent months.

If providing health care for low-income and uninsured families weren't challenging enough, last fall during the state budget impasse, she was forced to take out lines of credit, reduce operating hours and put a freeze on hiring simply to keep clinic doors open until "our hard-earned funds flowed again."

"I always seemed to gravitate toward services for people in need," she said. "And I like challenges, so this is the place to be."

Marselian, 49, was born in San Diego, the daughter of Yugoslavian immigrants.

"My family might have been poor in money, but we were very rich in cultural diversity," said the graduate of San Diego High School and San Diego State University.

Since her early teens, Marselian knew she wanted to work with needy populations "who wanted to improve their lot in life."

As a community college teacher in the 1970s, she saw a wave of South Vietnamese immigrants who needed a hand, not just to learn the English language, but also to get social services and assimilate into American culture.

With this in need in mind, she later helped found La Maestra as an immigration amnesty and training program, and then added a medical clinic in her home in 1991.

"We had nothing at the beginning, except a lot of need," said Marselian, who has been recognized locally and nationally as an ambitious champion for the cause of serving the uninsured.

During the past 18 years, the clinic has grown and now, along with three others (National City, El Cajon and Lemon Grove), serves 65,000 patients annually with a paid staff of 145 doctors, dentists, counselors, teachers, social workers and others who speak a spectrum of languages representing their clients from more than 60 countries throughout the world.

Marselian, who herself also speaks fluent Spanish, Italian, French and English, said that while the organization has grown and expanded in the last two decades, her main goal remains "finding the money to expand existing programs and start up new services to meet the needs of the community."

Her most recent endeavors have been establishing micro-enterprise training for small home-based businesses and cutting-edge telemedicine services.

Because many of the clinics' patients lack the language skills or transportation needed to visit out-of-area specialists such as ophthalmologists or podiatrists, Marselian said that by using cameras, computers and TV screens, they can now offer real-time, interactive communications between patients and consulting physicians.

"Telemedicine is a practical, cost-effective alternative to the more traditional face-to-face way of providing medical care," she said, noting the successful program the organization currently has with cardiologists at Scripps/Mercy Hospital.

Other areas she's exploring are telemedicine services for rural communities and teletraining for employees at all sites.

Looking ahead, Marselian said while she is very hopeful about the health care changes that might be ushered in by the new Obama administration, she realizes it will take time for major changes to take place.

In the meantime, she hopes La Maestra can gain the attention of the federal government and serve as a national model for how locally based, cost-effective and highly efficient social and medical services can be delivered.