Hans Strom, founder and president of Strom Commercial Real Estate, has handled 10 million square feet of commercial transactions worth an estimated $1 billion during the past 22 years. But in this economy, he is more than happy to negotiate lots of smaller transactions.

Strom, who occupies an airy space in the 100-year-old Colonel Fletcher building at 604-624 Broadway downtown, concentrates on specialized office and retail spaces with some live/work lofts thrown in.

His focus is San Diego's urban core, which spans downtown proper, the East Village and the uptown district, along with the traditional downtown high-rise office market.

Strom suggests that brokers holding out for the large sale and leasing transactions are not only setting themselves up for disappointment, they could be putting themselves on the road to oblivion. 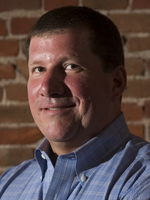 Content to lease up spaces as small as 200 square feet in the Spreckels Building, for example, Strom said small leasing activity is picking up. If Strom is right, the entrepreneurial spirit is alive and well in downtown San Diego. Strom has worked with Spreckels Building owner Jackie Littlefield for the past four years.

"Those spaces may have only had room for a safe and a sink, but we lease them ..." Strom said. "Who knows, maybe the next Microsoft or Apple could start in the Spreckels Building ... We're the people our clients go to when the market gets a dearth of tenants."

Strom's clients have included Robert Champion, who redeveloped the Colonel Fletcher building, the OliverMcMillan development firm, and Bud Fischer, who is well known for having redeveloped many buildings in the Gaslamp Quarter.

And then there is the Graham Downes' Blokhaus development firm. Downes has about 100,000 square feet of highly specialized space with Strom. The morphing of century-old warehouse space into architectural offices is a typical transformation for Downes, and he is happy to place the leasing under Strom's care. Downes said he has been struck by Strom's very different approach.

"It's very refreshing. My space isn't your typical triple net space. Hans has really carved out a reputation in this area, and there aren't many brokers who know how to handle this type of property," Downes said.

The process has been a learning experience. When he was still in his native Rochester, N.Y., Strom recalled that his first deal involving a Peugeot dealership "blew up" after his client lost a bundle in the stock market.

Now the market is in a down-cycle again, only more pronounced.

As tough as this market is, Strom believes a small company such as his (he only has seven people, including a support person) is ideally suited to mobilize quickly -- unlike many larger firms.

Strom said he hasn't been afraid to hire people who haven't been in the business before, noting that they may fare better because they don't have pre-conceived notions.

He plans to keep thinking outside the box. For example, instead of lamenting his fate when the bottom dropped out of the office condominium market last year, Strom was able to convince some of his landlord clients to offer prospective tenants leases with an option to purchase their spaces at a later time when the economy improves.

Strom said another strategy is a willingness to sign shorter leases of perhaps one to three years. This also gives tenants some breathing room until the economy improves.

Despite the smaller transactions, Strom said he handled about 250 deals last year worth a combined volume of roughly $40 million.

"There aren't as many sales but the leasing has picked up," he said.

Strom concedes, however, that many firms are shrinking in a wide range of fields.

"Architects are downsizing. Larger firms are moving into half the space, and smaller firms are contracting as well," he said.

Strom also noted a lot of new businesses entering the downtown area; newly formed companies or those seeing an opportunity to expand downtown. One of these is an Ocean Beach coffeehouse known as Java Joe that plans to move downtown shortly. Another company Strom declined to name has developed a temporary shrink-wrap like substance with custom-made lettering that effectively allows an automobile to become a billboard for a time.

While unusual office and ground-floor retail projects are the firm's bailiwick, Strom's firm also handles leases and sales in suburban markets and has been involved in some residential/mixed-use developments, including the recently sold out 327-unit Icon development in Little Italy. He said patience was a key ingredient to filling that complex.

Brokers, he said, must be willing to market even tiny spaces.

Strom, who handled more than 700,000 square feet in leasing to Fortune 500 clients and some major sales transactions in Rochester, came to San Diego and CB Richard Ellis in 1996. He was instrumental in leasing up both the 550 Corporate Center and Civic Center Plaza.

He had fully formed his own company by 2003.