BOMA San Diego announces 2009 board of directors, advisory board

The San Diego Building Owners & Managers Association (BOMA) has announced the appointment of the 2009 board of directors and advisory board.

The new board of directors will be led by Joy Cole, RPA, of Jones Lang LaSalle. Cole has previously served as the board secretary and chairperson of the community service committee, as well as participated in the government affairs committee. Barbara Puccio, RPA, FMA, of CB Richard Ellis, was elected as vice president and will also chair the strategic long-range planning committee. Puccio previously served as a member-at-large and chairperson of the Special Events committee.

"I am honored to serve as president of the board of directors to represent BOMA San Diego this year," Cole said. "With a combination of both seasoned and new board members, we will work as a team to lead BOMA strategically and successfully throughout 2009." 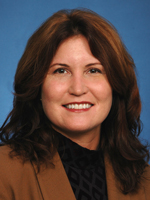 Brian Galligan of Kilroy Realty Corp., previous member-at-large, has been elected as secretary, and Jack Renshaw of General Coatings Corp. will serve his second term as treasurer. Craig McMahon of Kimball, Tirey & St. John LLP will also serve his third term on the board as general counsel.

The 2009 members-at-large include Barry Garson of J&M Keystone Inc.; Mike Hansen of CB Richard Ellis; Kim Davis of Universal Protection Service; and Carrie Petro, RPA, of CB Richard Ellis. In addition, Ted Kimball of Kimball Tirey & St. John will advise the new board of directors as the immediate past president.

Through the leadership of the board of directors, BOMA San Diego sponsors monthly luncheon meetings with leading industry speakers, publishes a 12-page monthly newsletter, conducts continuing education programs and hosts two annual awards competitions -- The Office Building of the Year and Membership Awards -- to recognize professional excellence. The advisory board is comprised of commercial property real estate stakeholders who will aid BOMA in identifying and planning for the needs of the local commercial real estate industry.