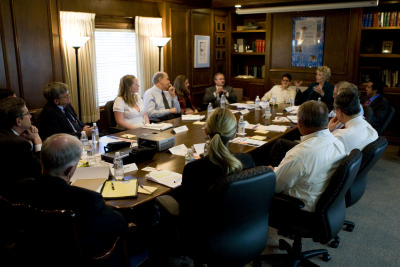 With a struggling economy, high unemployment rates and the military fighting battles on the other side of the world, Americans have their share of worries.

Here in San Diego, however, the defense industry is staying afloat. And local industry leaders expect the trend to continue into the future.

"Even if the administration decides to make some changes in the defense structure and some of the programs, you're talking probably two to three years before you see those effects take place," said Terry Magee, vice president of maritime strategies and campaigns for Lockheed Martin Information Systems and Global Services and former president of the San Diego Military Advisory Council. "I don't see anything but continued growth in the San Diego region."

The 2009 defense budget is approved already, and while some cuts could be made to the 2010 budget, participants at a Daily Transcript defense industry roundtable agreed that those changes would have little impact on San Diego companies.

In fact, they predict an increase in spending in the areas of technology and infrastructure -- two arenas in which local companies shine. And an increased awareness of the needs for cyber security could mean even more opportunities for San Diego.

There is a downside, though.

While other industries are reducing their work forces, many in the defense industry are worried they will not have the work force to continue their efforts.

"If San Diego emerges in cyber technology, finding a work force is a real challenge," Magee said, adding that in the near future, nearly all engineers will come from the Asian Pacific area -- a harsh reality that creates security problems for defense contractors.

It is difficult, if not impossible, for foreign nationals to gain security clearances necessary to work on some highly technical government contracts.

But industry is not sitting back waiting for something to change. Instead, companies and organizations are proactively reaching out to students at the college, high school and even middle school levels in an effort to interest them in science, technology and engineering careers.

The Armed Forces Communication and Electronics Association (AFCEA), the National Defense Industrial Association (NDIA) and the San Diego Military Advisory Council (SDMAC) all have their own educational outreach efforts.

But gaining clearances can be difficult for natural-born U.S. citizens as well. They often face long delays in the clearance process. And on the other side of the coin, others with security clearances perfect for some contracts may not have the skills necessary to do the work.

"I think for everyone here, we do a lot of work in the intelligence space, homeland security, with three-letter agencies," said Hany Girgis, chief executive officer and president of SGIS. Despite the challenges to find the right work force to perform on government contracts, there is room for growth in the defense industry.

The recent economic downturn could be a profitable opportunity for a company that has the time and capital to wait out the clearance process and learn the work of government contracting.

"A lot of times when disaster happens, as we all know from our families, it seems like when crisis occurs, that's when everyone kicks in and really looks for new ideas -- looks for new ways of making money," said Shirley Adams, senior director, technical solutions for General Dynamics IT and president of AFCEA. "When I had my small company, 9/11 was a disaster, but in other ways it put us into the DoD. So again, if you have that core competency, something that you can offer, and you have passion for it, and you work hard to get it, then it's a lot easier for those types of companies."

Also, funding is available to those looking to build companies with a solid business plan, said John Nersesian, SDMAC president, who has worked for North Island Credit Union.

"There are (Small Business Administration) funds available to do these loans, there are institutions willing to do it, but the loan needs to make sense," he said. "If it makes sense, or reasonable sense, and is reasonably structured, the SBA is there to fund those. The institution I was just with is looking for those kinds of loans."

Contracts requiring clearance are not the only options for companies looking to break into government contracting.

With a pending increase in the military's presence in San Diego, new infrastructure projects are on the horizon. New housing developments and base buildings must be built -- projects for which San Diego construction, engineering and architecture firms can compete.

Tony Nufer, project manager for Computer Sciences Corp. and executive vice president for NDIA, said he has not seen as much emphasis on these construction opportunities as there should be.

"Right now it's not as dead as people think in this region," he said. "I don't think people know where to look."

Magee also is concerned about the lack of enthusiasm on the part of local municipalities to seize opportunities in defense spending.

But it isn't being completely overlooked, either.

Steven Geyer, principle engineer at Tetra Tech EM Inc., said he has seen movement within the commercial sector toward government contracts. He said a push within the military to reduce and even eliminate its impact on the environment opens doors for companies specializing in green building and sustainability -- an area in which he said San Diego has a lot to offer.

SAME hosts an annual small business outreach event that brings government and business together -- an event that he said has seen an increase in attendance in recent years.

"It's really a neat opportunity because as anyone knows, whether it's defense or infrastructure, doing the actual work is easy," he said. "It's getting through the contracting mechanism that (is hard)."

Groups such as AFCEA, NDIA and SDMAC also offer a variety of resources throughout the year to help businesses connect with the military and to learn about contracting.