Vista motor company rolling out car of the future

A white car-like vehicle stopped at an intersection in Carlsbad on a recent weekday afternoon as a motorist in an early 21st century SUV stared.

It looked like something out of a sci-fi flick as it cruised to a stop.

The white, bee-shaped vehicle had a front end rounded like an egg, but it sloped back to a point.

Its shielded front wheels were spaced far on either side of its body, the axel exposed. And its back wheel (yes, singular) was nearly hidden under a narrow piece of the vehicle reminiscent of a boat's keel.

He gave the woman in the SUV a short wave and smiled. He's used to getting stares when he takes his company's car out for test drives. 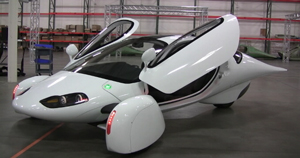 The all-electric Aptera 2e reaches up to 90 miles per hour and can go about 100 miles on a single, overnight charge.

The Aptera 2e, like the one McCammon was driving, is scheduled to hit the streets with average consumers behind the wheel in the fourth quarter this year.

While the three-wheeled vehicle is technically classified as a motorcycle by U.S. regulations, it was designed as a car from the beginning, McCammon said.

The company, based in Vista, is currently honing the car's design to get it ready to ship later this year.

The all-electric Aptera 2e reaches up to 90 miles per hour and can go about 100 miles on a single, overnight charge.

That's about the equivalent of 300 miles per gallon of gasoline.

There are already about 4,000 people waiting in line for the 2e and its hybrid sister, the 2h, scheduled to be available beginning in 2010.

But "green" enthusiasts aren't the only ones backing the car. Aptera has received more than $24 million in funds from companies like Idealab.com and Google.org.

The company "has grown faster than I thought it would," said Fambro.

Aptera currently employs about 100 people and will potentially grow its staff to more than a thousand as it ramps up production.

Assembly-line production will take place in its Vista facilities. It will take about two hours to produce one vehicle once the factory is running at full speed.

Fambro said the spark for the idea came from a "selfish" reason -- a desire to drive in the carpool lane by himself. However, he realized quickly that he wouldn't be going anywhere very far with an all-electric vehicle made of steel.

"I needed it to have low drag, low weight if I wanted it to go any reasonable distance," he said.

The design has been an aerodynamic one from the beginning. The fluid, space-age shape of the vehicle is an integral part to why the car works.

While most cars spend 50 percent of their energy pushing air out of their way, the Apteras "glide through it," said McCammon.

The next challenge was to build a car out of material that was light enough to help the electric motor, which is the equivalent of about a 70 horsepower engine, while providing safety for its passengers.

Fambro said the silica composite the company uses to construct a single piece for the vehicle's frame provides both.

The Aptera frame withstood three times the pressure from the Federal Automotive Static Roof Crush Test and didn't even crack, McCammon said. He added most vehicles come out of the test looking like a "pancake."

He said Aptera will occasionally find people nearby the facility and invite them to try to put a dent in the car's frame for $100.

Most think it will be a simple procedure, but are quickly discouraged when the sledgehammer they use on the car bounces off without leaving as much as a scratch.

"Then we ask them if they want to try that on their car," said McCammon. "We haven't had anyone take us up on that."