The California Surf Museum has become a fixture of the Oceanside community, and with its relocation grand opening coming up on March 26, it's about to grow in size and recognition once again.

The Oceanside City Council voted 5-0 last August to provide $624,975 in redevelopment bond funds for the museum's move to a vacant city-owned building that used to house the Playgirl strip club until 2002. Oceanside's purchase of the building was one strategic step toward enhancing its downtown image, and the sweetheart deal it made with the surf museum to take over the Pier View Way building -- which includes charging the museum a mere $100 per month in rent - was another.

"The city is behind us 100 percent," said Jane Schmauss, the California Surf Museum's co-founder and historian. "We're one block closer to the beach now, which is always good. (The museum will be) part of the downtown walkable experience and, personally, I think we'll be an anchor for that." 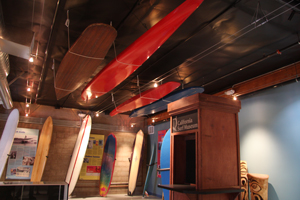 Jane McVey, the city of Oceanside's economic and community development director, agrees. In the city's attempt to increase tourism dollars, she couldn't be happier to see the surf museum take over the old Playgirl building, which the owner reluctantly sold to the city for $1.5 million.

"The nude bar was what we'd call a 'nonconforming use' -- not desired nor generally liked," McVey said. "We were fortunate to do a sort of business arrangement to buy it out." She explained that the city wanted to find the right business to inhabit the space, one that would enhance the image of downtown. A high-quality surf museum seemed like the perfect fit for Oceanside's laid-back, SoCal vibe.

"There's great sand here and great waves here. ... We have some of the best beaches around," McVey said. "The mix of people, mix of housing ... (Oceanside) just has that classic California feel to it, of which surfing is a big part."

The museum's new home is 5,100 square feet -- nearly three times the size of its previous space on Coast Highway -- completely restored from top to bottom and boasts an ocean view. The architect on the renovation project custom-made the building with unique surf-related influences, like a wave of embedded seaglass at the entry; stamped concrete with fossilized shell design in the sidewalk out front; and a "WOW" wall with a wavy interior, decorated by Oceanside GlassTile.

"There's a lot of love put into it for sure," said Julie Cox, the museum's operations manager and a native California surfer. "It's a big upgrade."

The surf museum comes from an original concept born 23 years ago, during an informal meeting among Jane Schmauss and other San Diego locals, where it was acknowledged that throughout the region, there were no surf museums to be found.

"I personally thought that was a shame," said Schmauss.

The museum began as a small collection of surfing memorabilia in the Encinitas restaurant Schmauss owned, and its newest site at Pier View Way will mark the museum's sixth location from Pacific Beach to North County.

The new lease is for five years, with the city of Oceanside dismissing one-fifth of the museum's renovation loan for each year the museum stays at the downtown location and meets certain requirements. After that, Cox said the plan is to expand, but to hopefully remain in Oceanside.

"A lot of locals are proud to have this in their neighborhood, so they'll bring friends and family in," said Cox. "There's a sense of pride, standing around talking about the boards. ... (Even those that) don't know much about surfing want to have a look. There's something for everyone here."

While the gift shop at Pier View Way is already open to visitors, museum staff is working hard to put the finishing touches on exhibits in the new space for the March 26 grand opening and ribbon-cutting ceremony. The all-day festival will be open to the public, according to Schmauss.

Admission to the museum will be free through March 31, to be followed by a $3 charge for adults, and $1 for students and seniors. Museum members always have free admission.

Schmauss is excited about taking on even more responsibility with so much additional room now at her disposal.

"We've had things squashed in storage for years and now we'll have far more things on display, far more photos," she said. "My job is to archive things correctly, which I've waited for years to do -- and now it's showtime."