As a consequence of the global economic crisis, vacancy rates are rising across all product types in virtually every San Diego commercial real estate market. Fortunately, this increase is coming off the historically low levels of vacancy experienced in these markets as recently as 2007. For vacancy rates, what goes down must go back up.

Historically, office vacancy has been more volatile, especially in economic down cycles. During a period of economic growth, industries that occupy office space, such as the financial and business sectors, swell in size and force vacancy rates down. During an economic downturn like the one we are experiencing today, they shrink even faster than they grew.

Due to the office market's tendency to expand rapidly in a thriving economy, office transactions have typically been characterized by a proportion of investment sales greater than transactions in other product types because office investments tend to yield the highest returns. Consequently, a greater proportion of office space is occupied by tenants in larger multitenant buildings.

During an economic slowdown, companies that lease their workspace are far more likely to vacate a property than companies that own their own space. For many businesses, the ability to survive an economic downturn depends on their ability to reduce their company's overhead. One way that tenants may be forced to do this is by downsizing and leasing smaller space at a lower cost, thereby substantially reducing net absorption.

Owner/users are better positioned to weather a downturn because they generally have lower and more stable occupancy costs. Thus, even if their company's income diminishes, they are less likely to be forced to vacate their properties. Furthermore, owner/users are less likely to sell property in a slow economy because they are not forced to accept a low price in order to generate a quick sale. However, owner/users who purchased their buildings in the last two years with high leverage are more at risk, and these owner/users are forced to hunker down or risk selling their property at a significant loss.

Although a number of factors are responsible for the lack of sales activity in the current market, the inability to obtain financing is widely recognized as the most significant. However, what little available credit for investment in commercial real estate tends to go to owner/users. Lenders are more prepared to loan money for owner/user acquisitions than larger investment sales because of the relatively low risk owner/user deals pose.

Aside from the greater proportion of owner/user properties in the industrial market, San Diego's unique demographics have also ensured low rates of vacancy in the industrial rather than the office market. The total industrial space in San Diego is 165,703,905 square feet, which is a great deal less than the 485,317,712 square feet of industrial product found nearby in the Inland Empire. The lack of available land within San Diego County forces its price well above that of the neighboring Inland Empire, which has an abundance of inexpensive land. Simply put, the finite supply of product stabilizes the market as even limited demand tends to keep vacancy in check.

As demand picks up and outpaces supply, rents may spike on the upside of the current cycle. However, gains in industrial rents will be more modest than those on the office side because as the economy gets moving again, it will be the office users who return to their old ways of rapid growth, repeating the whole process once again. 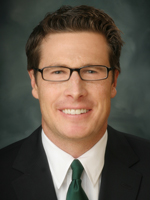