"We managed the construction of 58,000 square feet of retail/commercial space within the 120,000-square-foot retail center, as well as construction of all site work," said Jim Peevey, vice president of operations. "Some days, we had well over a hundred people working at the site."

Grant constructed nine retail buildings that included space for Trader Joe's, one of the anchor tenants, plus a 5,000-square-foot pad for a future bank and a 16,900-square-foot future drug store pad. Stater Bros., another anchor tenant, did its own construction and Grant provided its pad and parking lot.

"When you're building a center of this magnitude, it is a major orchestrated event," said John Sandahl, senior project manager. "Daily we had three and sometimes four superintendents managing the construction. 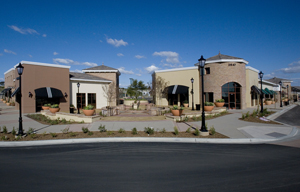 "We started the project by creating a master schedule. Then we fine-tuned as we went along, meeting with the developer on a weekly basis and daily or weekly with subcontractors to make sure we stayed on schedule."

"We had to pass hundreds of inspections before the center was complete," Sandahl said. "Each building had at least 20 to 40 inspections mainly from the city building and fire departments."

Construction for the center started in January 2008 with a target date of March 18, 2009 given to the developer. It was officially completed Feb. 13, 2009, and was opened to the public on Feb. 16. Finishing touches were wrapped up the last week in March.

"With all the challenges we have to face on a job this size, the biggest one is people management," explained Sandahl. "You want everyone to be happy with the results and that includes the owner, the city, the neighbors and the subcontractors."

The Bressi Village Shopping Center was created with a "Main Street" or village character, where all stores are oriented toward the street instead of the parking lots. The center is enhanced with wide sidewalks, decorative paving, designer street lights and street furniture to augment the pedestrian shopping experience. Just signed up to join the center are Carlsbad Optometry, Gateway Dental and Happiness Nails, along with previous tenants Peets Coffee & Tea, Rubio's Restaurant, Robeks Juice, Board & Brew Sandwiches and Premiere Cleaners.

"One of the unique features of the site work was the bioswales we built that are designed to remove silt, and in the case of the parking lot, pollution from oil and fuel runoff," Peevey said. Swales are drainage ditches that are usually wide, shallow and filled with sand, gravel, rock and landscaping. When it rains, as the water runs off a parking lot filled with pollutants, it runs into the swales and the organic materials trap the impurities before the water reaches the storm drains. The Bressi Village Shopping Center is part of the "smart growth" development of the community. Smart growth building takes into consideration a walkable neighborhood with a range of housing, retail, office/industrial and recreation. It is intended to allow people to spend less time in their cars and more time in the neighborhoods where they can live, work and play. In addition to the shopping center, Bressi Ranch contains 623 homes, Village Square Park, Pacific Ridge School, a private, college preparatory school and a Boys & Girls Club. The community, when built out, will feature up to 2.1 million square feet of office and industrial space.