In the midst of a business park filled with gray-box buildings separated by patches of grass and a two-lane asphalt road, a statue of a dog stands guard in front of a light green chateau with a fighter plane perched on its peak.

The two businesses that share the building are not the typical Carlsbad tech or e-commerce companies.

One, the Reflex Corp., which makes dog collars and leashes, takes up most of the space, including a large factory-like area in the back for creating its products.

While it takes up a fraction of Reflex's space, the other business was clearly responsible for the building's look.

Upon entering the lobby, there is a stark divide as to which side belongs to whom. To the right, Reflex's offices look typical: the walls are primarily bare with desks and cubicles lined up in predictable patters. 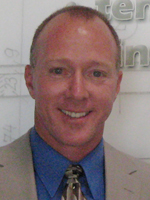 To the left, each office has a trellis, each with walls and desks full of family photos. Surfboards of varying shapes and sizes are everywhere: above offices, against walls.

The offices form an oval around an open area with a large table in the center.

In one office, three shortboards are lined up to create a picture of a beach scene.

It is the man sitting in this office that is responsible for Viking Commercial Construction, the company that created this office as well as dozens of others in the state.

Not many San Diego-based contractors can say they've been complimented highly by Ty Pennington and the rest of the "Extreme Makeover: Home Edition" crew, but Bill Larson can.

Larson, the founder and president of Viking Commercial Construction, was on the show in 2004 while working for his former company.

The Wofford family at Larson's church had been going through a rough time. After the family lost its mother, Teresa, due to complications with the flu in 2000, Brian Wofford was left to fend for himself and his eight children.

Though the last time Larson had anything to do with building houses was during college while putting up house frames, his team volunteered to design and build the house -- in less than a week.

It was the first time on the television show a team of contractors finished the house early and the results did not disappoint the family.

In the last quarter of the two-hour episode, the family was overwhelmed by the outpouring of support from the community and their friend Larson.

Though he didn't know it at the time, the show would eventually lead to him leaving his old company and starting Viking.

"Extreme Makeover: Home Edition" was not the sole reason for Larson leaving his former company. He said he had been thinking about a new way to do business.

"We opened up Viking wanting to be more progressive," he said.

Part of the progress was designing an office that allowed employees to utilize its central meeting space.

"No one feels left out in a given week," said Jaks Anderson, who is responsible for marketing and has been at the company about a month. "Everybody knows, and it's not micro management. It's open communication."

Being open does not stop with his employees.

Unlike some contractors who might market a job to their clients, get to work and finish the job without much communication in between, Larson said his company aims to follow up throughout the process.

He said he believes honesty and integrity are keys to doing business well. So far, his strategy has worked.

With several happy clients under his belt including Bank of America (NYSE: BAC), Wachovia and Portillo's Hot Dogs, his company has grown exponentially since landing its first job for $1 million in September 2005.

However, things did not always come easy. In the first few years, the company experienced some trouble.

"Some contractors that knew me, some friends, my personal mentors I was looking to for advice told me you can't grow that fast without growing pains," Larson said. "And the arrogant self wants to say 'No, that's not me. We're growing perfectly,' but I can look back now and tell you we had some growing pains."

Larson said clients did not notice the hiccups thanks to some scrambling and a few late nights, but acknowledged he made mistakes early on. He said he should have hired a vice president and other management sooner rather than taking on huge chunks of the business himself.

He said, however, that he learned from those mistakes and things have gone very well since then.

While the company's goal for this year was to do $30 million in business, he said it appears to be on track to do another $18 million. While not what he hoped for, Larson said he is thankful for the work, given the trouble in the construction and commercial real estate industries in the past year.

But that doesn't mean he is not actively looking for new projects.

"When I drive by a site that's not mine, I want to know why," he said.

Though Larson said he is extremely competitive, he still spends much of his time volunteering for the community.

He is a board member of the Boys & Girls Club of Carlsbad, and Viking Construction has taken part in Habitat for Humanity's Blitz Build and building a home in Mexico with Baja Christian Ministries.

"Our whole business plan is based on Christian principles, and it was one of the overriding reasons why I opened this (company)."

The philanthropic work Viking does is something Larson said is close to his heart.

He joked, "We need to help with our community, because as contractors and subcontractors we're one step away from being that person."

For now, Larson and his employees can ride out the current industry trouble with a unique business model in its unique building.