By LISA KOVACH, Special to the Daily Transcript
Thursday, May 14, 2009

The Smart Growth Awards program honors outstanding and innovative projects, plans and people from the San Diego/Tijuana region that advance the application of smart growth and sustainability principles in land use. The awards are sponsored by Urban Land Institute San Diego/Tijuana District Council, a nonprofit education and research institute.

One project nominated for a 2009 award is Pacific Station, a $40 million mixed-use, transit-oriented redevelopment project, which will be the cornerstone of the new downtown Encinitas. 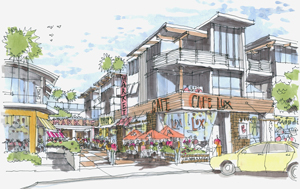 Pacific Station is located on the site of an old steel warehouse that once housed the Coast Dispatch newspaper.

Pacific Stations is located next to the Encinitas transit center, one block from the civic center and downtown library and near Moonlight Beach.

"Our basic focus on this project was to create a quality, lifestyle development that fit in well with the fabric of Encinitas," said John DeWald, of John DeWald & Associates. "The smart growth and sustainable elements came out of trying to design a good project. I think that it creates a good model for future development in the beach areas that both looks to the future but respects the past and the personality and style of the local community."

Located on the site of an old steel warehouse that once housed the Coast Dispatch newspaper, the project is designed to be energy-efficient and environmentally friendly.

Pacific Station will include several smart growth aspects, including using a number of resilient, recycled and renewable based materials and products, such as solar panels on the roof of the residential units. The solar panels are anticipated to provide an estimated 60 percent of the power for the homes.

The construction process of the project itself is also environmentally friendly, and includes a waste recycling program. To date, the project has diverted more than 90 percent of the waste generated from construction. During construction, more than 37,000 cubic yards of sand -- nearly the amount lost in one year along Encinitas's beaches -- was removed from the site to make room for the project's underground parking. The beach-quality sand was transferred to eroded beach areas near Ponto State Beach in northern Encinitas.

During the dismantling of the old warehouse, the old parts from the building were donated to a church in Mexicali, which will reassemble the parts for use as a worship hall and community center.

Recycling will continue to be an important element of the project after it is built. Pacific Station will include a recycling program for all uses (retail, restaurant, office and residential) and special parking spots for energy-efficient vehicles. DeWald noted that the he is also hoping to include hookups for electric cars.

"Smart Growth projects are the sensible thing to do. While they are the responsible thing to do from a community and environmental perspective, they are also the smart thing to do from a business perspective. They create lifestyle communities which have a far greater appeal in today's market, and making them sustainable is not that much of an extra expense if you are smart about your design decisions," DeWald said. "These kinds of projects, if they are done well, are easier to sell, can sell for a better price and are cheaper to operate in the long run."

DeWald is seeking a silver Leadership in Energy and Environmental Design (LEED), certification for the project.

Pacific Station's 47 residential units consist of two-story townhomes, two-story lofts and single-story flats ranging from 600 to 2,400 square feet. Four of the units will be offered at a reduced price to low-income residents.

In addition, the development will feature 40,000 square feet of retail space, including 4,100 square feet for a restaurant. Pacific Station is the first new retail space to be built in downtown Encinitas in more than 20 years.

The project will also include 9,000 square feet of professional office space, encompassing two floors. Office units will range in size from 800 to 4,500 square feet.

Pacific Station, which began construction in August 2008, is expected to be complete by the first quarter of 2010.

The ULI Awards will be held May 14 at Wonderhaus, located at 171 14th street in downtown San Diego. Wonderhaus is a redevelopment project for multi-tenant retail and office use, located on the site of the iconic Wonder Bread factory buildings. Tickets to the Smart Growth Awards are $45 and can be purchased at ulisd.org.

Kovach is a senior account manager with TW2 Marketing Inc.