The Hotel Occidental has received the Downtown San Diego Partnership Alonzo Award, the organization's annual event honoring projects that have contributed significantly to the revitalization and renewal of downtown.

The hotel partly was recognized because the success of any neighborhood is strongly dependent on providing the right mix for its residents, which has been proven to sustain vitality over time. The adaptive reuse of a Knights of Columbus Hall into a traveler's hotel provided the neighborhood with a renewable source of individuals whose presence alone gives the community a sense of pride.

Given the strategic location of the hotel, guests will be able to travel through the neighborhood either on bicycles, which the hotel provides, or on foot. This allows people visiting from different geographic locations to appreciate the uniqueness of the enveloping neighborhood, and to do so in an up-close and personal manner that engages the local population and reinforces the community's sense of place. The project team specializes in identity and brand development, allowing the project to acquire a status that goes beyond conventional architecture. 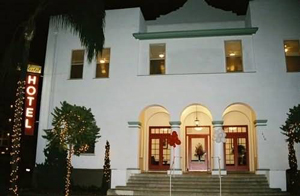 In addition, the preservation of a building that reflects San Diego's history gives the neighborhood a sense of historical continuity. Built in 1923, the structure had since become dilapidated and crime-ridden. The old charm has been restored, along with contemporary amenities and the functional streamlining of European design. The contractor selected for the job, TSA, is a well-established firm whose work ethic and focus on the community became an added asset for the project, inasmuch as it secured both an environmentally and historically conscientious renovation.

The hotel's 54 rooms can be booked for short as well as long-term stays. The relatively small size of the hotel provides the guest a sense of family. The traditional mission style, with its open-air courtyard, allows guests to appreciate the sun and offers the ideal space for small-scale business meetings or private events.