Located in Lemon Grove just minutes from downtown San Diego, Citron Court is a new mixed-use infill development that brings 36 units of affordable housing atop two street-level commercial spaces to the commercial corridor of Broadway. Citron Court also brings trees back to the street front, including the walkability of the community.

A collection of two- and three-story buildings made up of town homes and flats co-mingle across a skinny city block to interact with neighbors and create a series of courtyard spaces conducive to the chance conversation between residents. The mixture of townhomes and flats adjacent to the existing single-family home neighborhoods contributes to the smart growth technique of housing diversity.

Modern in style, the buildings gain in density and height as they move from the quiet residential neighborhood on Pacific Street to the bustling commercial corridor on Broadway. 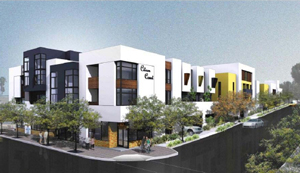 Families with children at the kindergarten through sixth grade levels will be able to plug into the award-winning "Lemon Link" program offered for free at the Lemon Grove public schools celebrating innovation in the connected learning environment. Likewise, the local elementary and middle school are accessible on foot.

Citron Court has access to nearby transit, with bus stops downstairs on Broadway and the San Diego trolley stop within walking distance. Major grocery and retail centers are directly across the street, eliminating the expense of keeping an automobile, a luxury many families living in work force housing don't always have. Likewise, the closest public recreation parks are half a mile or less in either direction, adding to the walkable nature of the community.

Citron Court will be a catalyst to Lemon Grove as the first new mixed-use development using smart-growth principles and eco-friendly design provides affordable housing in the suburb of downtown.

Citron Court will be complete in June and will be home to families, single young professionals and seniors.