Vijay Samant is a man who likes innovation.

The president and chief executive officer of Vical left his native India as a young man to study chemical engineering in the United States, in part because this country is the birthplace of that science, but mostly because it seemed like the most interesting place to be.

After finishing graduate school at Columbia University, he went to work for Merck, and stayed on board with the pharmaceutical giant until he said he noticed the company had reached something of a plateau in ingenuity.

He then went to San Diego's Vical, which at the time was a tiny company, but with a vastly different way of looking at vaccines. 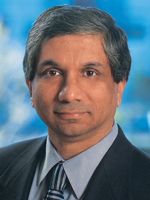 "It sounded like a great career move to come to San Diego and take a terrific company with a very innovative vaccine technology, which is a subject that I really love, and see what we can do with it," he said.

Vical's technology involves delivering vaccines into a body via DNA, rather than the traditional vaccination method of injecting a patient with a dead or disabled virus. Scientists believe this technology could eventually be used to fight some of the world's toughest diseases, such as HIV, or the recently declared pandemic of H1N1, better known as swine flu.

Applying it to these difficult targets is the reason the vaccines have not fully come to fruition yet, but Samant remains hopeful that they will soon.

"Once this technology was discovered, everybody thought this was going to solve all the problems of the world," Samant said. "The technology had a lot of setbacks early because it was applied to some very hard targets ... Now people have scaled back and applied it to things where it has a reasonable chance at being successful."

Vical's technology works by engaging both arms of the immune system. The human immune system has two main arms for fighting disease, which Samant describes in terms of "soldiers" and "bullets." The t-cells represent soldiers; they can capture and kill diseases, but need information to do so. Antibodies can kill instantaneously like bullets, but they need the body to be on alert in order to be fired.

With traditional vaccines, a virus may be killed with its physical characteristics intact, allowing the immune system to see it, recognize it and develop a defense. Or, the virus is not killed, but substantially disabled.

The first technique is limiting because it only allows the body to develop an antibody defense, which is only sufficient for some diseases.

Disabling a virus is difficult because it's more of an art form than a science, Samant said. This makes vaccines of that kind difficult to make and manufacture. Only a few companies in the world generally sell these vaccines, which are for diseases like mumps, measles and chicken pox.

A disease like HIV needs to be fought with both arms of the immune system, but so far scientists have been unsuccessful in disabling the virus to the point where it can safely enter a person's body.

Vical's technology is based on the idea that you could find a viruses' distinguishing feature, the trait that really separates it from other pathogens, and create it synthetically.

In this case, Samant compares the virus to a man wearing a very distinct and recognizable jacket. All the body needs to recognize him is the jacket, so scientists can take a ring of DNA, and put the recipe for the viruses' distinguishing feature -- the "jacket" -- inside it. This is then injected into the patient's muscle cells.

The nucleus of the muscle cell takes in the DNA and the recipe for "the jacket," then manufactures that recipe into that distinguishing characteristic. The characteristic is then released into the body, where the immune system can gather information on it, and eventually kill any real viruses matching its description.

"You make the recipe on the outside and use the body's own factory to make the jacket," Samant said.

This technology has allowed Vical to jump out ahead of some of its competitors in creating a vaccine for the H1N1 virus, because while the U.S. government would not release the virus strain to vaccine makers when the disease first struck earlier this year, it did release the gene sequence. The gene sequence is really all Vical needs to manufacture synthetic versions of the virus's distinguishing characteristics.

"People say, 'Tell us how us your manufacturing technology compares with conventional vaccine technology.' I say, 'It doesn't compare.'" Samant explained. "We don't make vaccines, the body makes the vaccine."

"You're not making a fancy lobster thermador," he said, "you're (just) boiling water."

Vical has its own biologics manufacturer at its San Diego campus, where all of the company's 120 employees work.

This kind of vaccine technology was accidentally discovered at Vical before Samant came on board in 2000. Other companies, including Merck, tried using it to create vaccines, particularly for HIV, but with little to no success.

Vical is still in the research stage at this point. The company is funded through its stock, and recently went through several rounds of offerings, which Samant said were just part of the lifecycle of the company, not for any particular product.

The company's stock is currently trading in the $2.25 range. In the past five years, it's reached highs of about $6.40, and took a steep drop to $1.11 in November of last year, but has been on a gradual upslope ever since.

In addition to HIV, influenza and other infectious diseases, Vical is focusing on a wide variety of diseases its DNA-based technology can apply to, including cancer and cardiovascular diseases.

Passionate about his company's technology, Samant is confident that given the proper time and research, Vical will one day provide effective treatments for the world's most threatening diseases. He is involved with several international foundations and nonprofit organizations trying to fight HIV and other illnesses, including the Bill and Melinda Gates Foundation.

But he is also a realist. The best case scenario for HIV will likely be a vaccine that doesn't prevent a person from catching the virus, but makes it so once contracted, the virus will be so weak that it can't be transmitted to other people, and will have far less damaging affects on the patient. That is probably seven to 10 years away.

Samant also noted that in the last 50 years, the world has seen the rise of new viruses like HIV, West Nile and Ebola, and there will likely be more. He also said that increased travel and overcrowding have made conditions ripe for more and more pandemics in the coming years.

Vical's DNA-based vaccine technology may have struggled because it was applied to tough targets too early, but Samant said he thinks it still has enormous potential.

"The way to describe this technology is like Hong Kong real estate," he said. "You can only do so much on that little piece of land, but Hong Kong is an extremely productive place, and that's exactly what we have done. We've taken the small real estate and made it very productive."