Gerald T. Proehl grew up in the Buffalo, N.Y., area, worked in the Southeast and then the Midwest before making his way to San Diego, where he is the CEO of Santarus, a $130 million specialty biopharmaceutical company.

Proehl arrived in San Diego in 1999 to head Santarus after leaving his position as vice president of cardiovascular drugs for Hoechst (NYSE: HOE). At the time, Santarus was an early-stage startup, with two venture capital investors and two part-time employees who had just closed a first round of funding to the tune of $4.8 million. 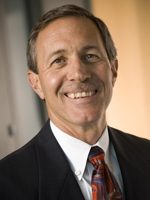 Proehl said the move was prompted by an interest in startup companies and raising venture capital.

"I had no idea how to raise money. The two VCs could show me, and I could learn how to raise capital and ultimately have an opportunity to run the company -- which is how it worked out," he said.

The name Santarus is a combination of the names of Dr. Sanborn, an expert in inflammatory bowel disease (IBD), Dr. Targan and "the rest of us" -- a tongue-in-cheek reference to their collaborative culture.

Santarus had no products to market, so Proehl focused on business development. He built up a small management team of 10 to 15 executives and began to look for opportunities.

The company originally worked on a delayed release formulation of azothioprine, an immunosuppressant used in organ transplantation and IBD, taking it to the clinical study stage before deciding not to go forward with it in 2000.

Through his network of contacts, Proehl and his team then identified Zegerid, a proton pump inhibitor (PPI) drug closely related to the gastrointestinal (GI) field Santarus was working in. They worked on formulating the oral suspension formula, on the flavoring and testing of the drug.

Proton pump inhibitors are a group of drugs whose main action is a pronounced and long-lasting reduction of gastric acid production. They are the most potent inhibitors of acid secretion available today.

The concept for PPI came from the labs at the University of Missouri-Kansas, where Proehl had contacts. He had also previously overseen a co-promotion for Prilosec with Astra Merck Inc., which gave him experience in this area.

"Prior to Zegerid, all GI drugs in the market had an enteric coating formulation, which protected them from stomach acid but also delayed the absorption of the product, hence the term 'delayed release.' We developed an immediate-release PPI formula," Proehl said.

Zegerid works within 30 minutes, whereas other drugs take effect within 90 minutes to three hours, according to Proehl.

Typically, immediate-release drugs work faster but their effects do not last long. With PPI, the duration of effect is the amount of time our bodies take to generate new parietal cells, which is roughly 24 to 72 hours, Proehl said.

Santarus commercialized Zegerid in powder form in 2004, which is also when the company went public.

"The biggest challenge has been that we compete with some of the large companies -- Astra Zeneca, Wyeth, etc.," Proehl said. "We have PPI and all the others have delayed release. It's difficult when you are competing with the big companies because they have such deep pockets, they can out detail you with sales reps, marketing and even consumer advertising."

Santarus has worked on differentiating Zegerid from the rest by having its 300 sales representatives call on doctors.

Proehl makes it a point to accompany sales reps on these calls, at least once every quarter, to keep in touch with what is happening on the field.

Aside from Zegerid, which treats upper-GI diseases, Santarus also focuses on Glumetza, an extended-release formulation of metformin for Type II diabetes, which it licensed from a Bay Area company. Glumetza reduces the GI side effects by delivering the metformin over a longer period of time.

Glumetza had sales of $4.5 million for the first quarter of 2009, out of total revenues of $34.8 million. Santarus had $24.5 million in revenues in the same quarter last year. The company had losses throughout 2007, while it was building sales, Proehl explained.

"We were moving toward net income positive at the end of '08, but we entered a licensing agreement that set us back and we had to take a large write-off," he said.

The improved results in '09 are the result of growth in sales, better control of expenses and also because Santarus is no longer paying a high royalty on net sales of Zegerid to a co-promotion partner.

When asked about plans for the future, Proehl immediately joked, "To get our stock price up."

While he feels good about where the company is right now, Proehl said he's still not satisfied. His goal is to continue to increase revenues, get more profitable and continue to build the company.

Martha Hough, vice president of finance and investor relations at Santarus, describes Proehl's management style as very consultative. "He is more of a consensus builder with his senior team. With employees at other levels, he is a walk around type manager. His door is always open."

In his free time, he enjoys riding bikes and running and has run a couple of marathons, here in the city and in Arizona. "I grew up in Buffalo, N.Y. I live in San Diego. Enough said," he laughed.