A longtime dream of National City became a reality this summer when the 173-room Marina Gateway hotel opened in time for July Fourth on Bay Marina Drive at Interstate 5. The 15-year project is the result of extraordinary efforts by a wide team of participants including the National City Community Development Commission (CDC), California Integrated Waste Management Board, Sycuan Band of the Kumeyaay Nation, U.S. Fish and Wildlife Service, the Port of San Diego and developer MRW Group.

The 6.5-acre site previously housed a slaughter house, auto wrecking yard and unregulated landfill that resulted in soil and groundwater contamination by hazardous materials. After acquiring the site in the 1990s, the CDC was able to secure a grant from the California Integrated Waste Management Board to conduct an environmental remediation project that included restoration of a portion of Paradise Marsh federal wildlife preserve and an embankment between the hotel site and the marsh. The state constructed public walking paths and a scenic overlook from the site into the marsh, and Sycuan reimbursed the state for those costs. The County of San Diego Department of Environmental Health deemed the remediation project complete in August, 2007, following which development plans could be finalized and construction commence. 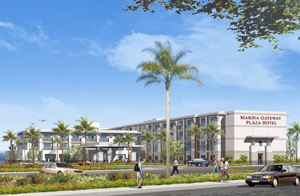 "We are really excited to see this example of redevelopment reaching fruition," said Mayor Ron Morrison. "It has taken a good deal of diligence, patience and determination on the part of many. Now the community will see the pay-off."

The project will include the full-service hotel and Buster's Restaurant (well-known from its Seaport Village location) in addition to a 16,000-square-foot retail center. Seventy-five to 100 jobs will be created, as well as significant sales tax dollars.

A Bay Marina Drive improvement adjacent to the project will be constructed in the coming months and promises an enhanced look and travel experience at the gateway to the new National City Pier 32 Marina. Additional revitalization efforts in the immediate vicinity are currently being planned.